it's opposite day. and you're a tagger. what to do? clean walls, obviously. duh. 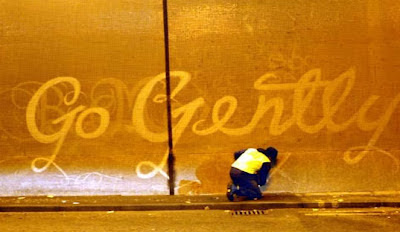 but do it in an artful, creative and expressive way. of course.

the UK’s paul curtis, better known as “Moose,” is one of the technique’s pioneers. operating around leeds and london, he has been commissioned by a number of brands, such as smirnoff, who want to convey a sense of “clean” in an innovative way.the practice puts authorities in a definite moral quandary. according to moose, “Once you do this, you make people confront whether or not they like people cleaning walls or if they really have a problem with personal expression.” 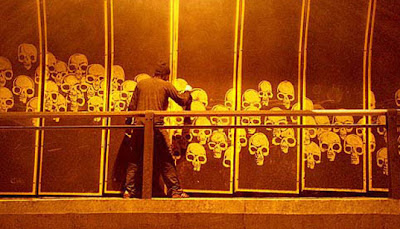 brazilian artist Alexandre Orion turned a são paulo transport tunnel into a kind of graphic charnel house, lined with skulls. He created the images, the project's website explains, "by selectively scraping off layers of black soot deposited on those walls in the short life of this orifice of modernity." 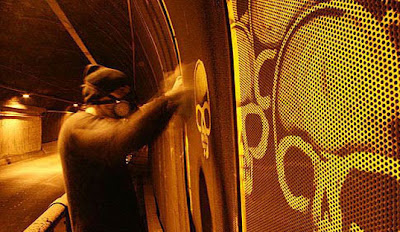 eventually, authorities came along and fire-hosed the work down. what a bunch of mal contents. sheesh. 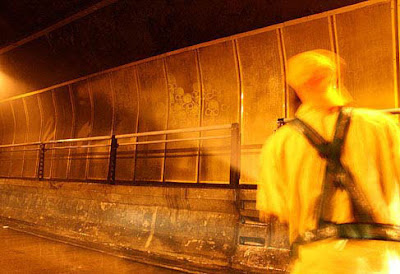 Anonymous said…
I just had to comment on your comments about the Blueprint magazine. I find it interesting that most of the things you didn't like about the magazine are the reasons why I like it.

I love that they use a different layout and design than other magazines. It's refreshing. None of that same old boring stuff. I don't find it hard to read at all. Even though it's different, it's not "messy".

I loved the pink Christmas tree and the outfit the model was wearing. Again, it's nice to see something different and not the same old stuff. I think this magazine speaks to people like me who are creative and like to see new things done in a different way.

The index thing at the back is fun. Nothing wrong about it.

Did you ever consider that Martha's company started this magazine because so many young, hip people work in her company? Like her daughter for example. I have always loved Martha Steward magazines. They have the best pictures I have ever seen in a magazine. They are amazing at using color to the fullest. I don't often do the things in the magazines but I sure love them for the eye candy they are. And have you noticed how other magazines copy MSL ideas? See something in MSL magazine and then wait a bit and voila! Everyone's copying what Martha's people did first.

I can't believe all the crap Martha gets all the time. She is SO GOOD AT WHAT SHE DOES and has made an amazing business. She wouldn't be put down so much if she was a man. Nobody is perfect. We should all try to be more positive in our thinking and not put so much crap out there. Everything is not for everyone. Find what you like. Leave the other stuff to people who love that stuff. If your mother didn't teach you this, I will: if it's not something good, don't say it.
Thursday, November 8, 2007 at 11:54:00 AM PST

Anonymous said…
ps. And I can't believe the heading "martha stewart is a slacker". She works probably 10 times harder and more than most people out there. So what if she didn't have time to put on a fancy amazing Halloween costume. Why is it that our society just loves to put down others so much. It's sickening!
Thursday, November 8, 2007 at 12:00:00 PM PST

beachbungalow8 said…
i'm glad we don't all have the same aesthetic. how boring would that be.

and i will say this, martha is an amazing business woman. amazing.

but this....i don't think is one of her best efforts. i think it's a sad attempt at capturing a lucrative audience.

martha stewart is first and foremost, about getting your money into her hands.

she's a business woman. and a damn good one.

that said, i will always state what i feel on this blog. i won't be afraid to assert my opinions--even if you or anyone else doesn't agree.

beachbungalow8 said…
and btw, i agree with you,

"Everything is not for everyone. Find what you like. Leave the other stuff to people who love that stuff."

beachbungalow8 said…
wait...'slacker', is a pejorative term? huh. and to think that for much of the 90s i considered myself one.

Decorno said…
Anon: I take exception to you effectively calling Alexis Stewart young and hip. She's 42 years old (sorry, that's not young) and she's worn really bad corporate/boardroom sexless pixie haircuts pretty chronically in the past. She's also riding her mother's coattails without really having had a hip enough vision of her own to create her own unique identity and business proposition.

Additionally, here's the rub. If you are really a Martha Stewart fan (and I totally am because I am a capitalist pig and I think she's a groundbreaking entrepreneur and a role model for women in business - minus the jail time, of course) then you would want to continue to hold her to the highest standards. I think Blueprint is Martha's biggest missed opportunity in her portfolio of assets. I agree with BB8 when she suggests Martha paces, trying nervously to figure out how to beat the Domino formula.

Blueprint is ok. Just ok. But since when are we letting Martha the genius Stewart off the hook with *just ok*? Don't you think her magazine could be much, much better?
Thursday, November 8, 2007 at 1:15:00 PM PST