In the early 90s i ran across a designer named ellen o'neill. she looked like a diane keaton, betsey johnson hybrid with a touch of rachel-what's-her-name thrown in. i was instantly taken by her vintage, loose and funky, but articulate, design aesthetic. i began pulling anything i could find on o'neill. compiling a rather extensive file. {which is pretty impressive for a 7 year old}. 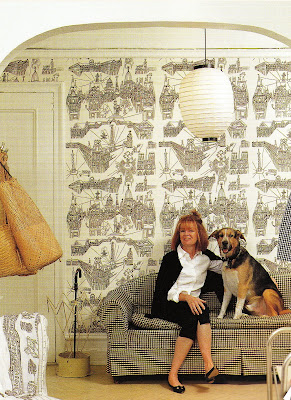 o'neill, veteran vice-president of home design for ralph lauren, has long been responsible for the themed life-style visions that are synonymous with the company. creating themes in a way that only ralph can do it. 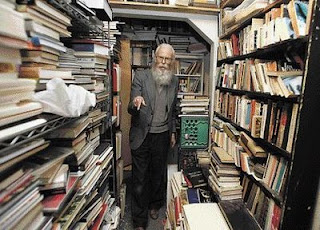 in my on-going effort not to become one of those crazy women living in a maze of old national geographics, wrapped in twine ~ for me shelter rags~ i pitch things. on one of these crazed cleanings, apparently, out went my 'o'neill file' and old victoria's showcasing her, packed to the gills, home.her apartment was a bastion of flea market finds and personal collections made into fantastic vignettes. {you really have to click on this photo and just, take it all in. the barbie in the upper left corner? that shoe. a plaid shoe. the wife dressing book. the little saint statue?} 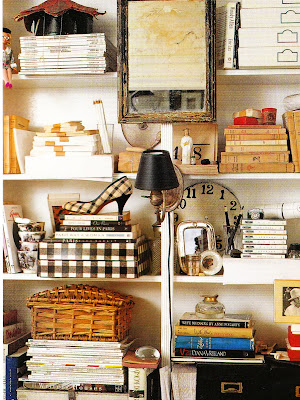 {let this be a lesson, insane collecting+fire hazards in the name of creative inspiration= big thumbs-up}
last night, i stumbled across a forgotten book on a shelf : designing women; interiors by leading style makers 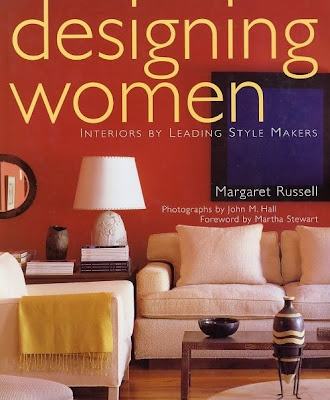 flipping through it i found a great spread on o'neill's 'updated flat'~the book was published in 2005. o'neill, feeling as though her chipped paint, furniture and white washed walls worked better at the shore, embarked upon creating a space dictated by the scenes outside her new york city apartment windows. elegant, urban, chic and sophisticated by way of black and white. 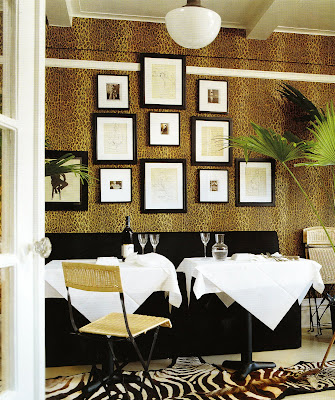 she got as far as the dining room. banquets, palms, leopard wallcovering~ how could your dinner parties not be fabulous in this spot. a bit of humor and vintage elegance. 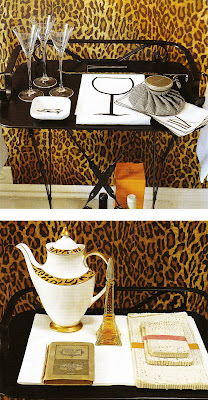 not feeling true to herself she says, "I sat there , thinking I was supposed to be thoroughly hip and modern and cool, divested of all my stuff, and it was like I was in a hospital, I hated it. There wasn't anything of me around; I was trying to be something I wasn't"

so it was back to collecting and layering. 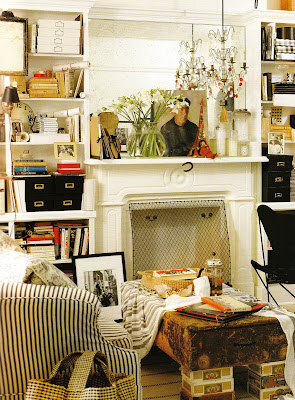 her home is this sort of beautiful, crazy person's lair. it's almost art directed hording. and i love it. there's so much cool crap, that i can't keep from staring at the photos. 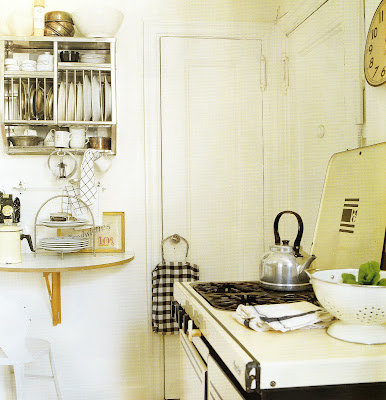 check it: an inspiration wall that's layered with ephemera, a little tissue paper from barney's, a single striped glove and then...a birkin bag. the set direction kills me. not everyone can aquire this much in such a small space and have the ability to arrange it with such continuity. 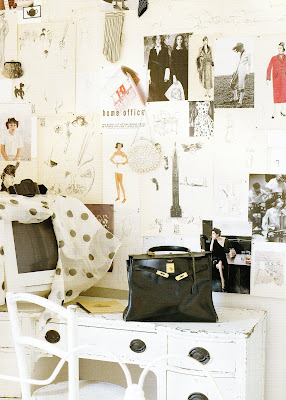 i'm not sure if this is going to lessen my pitch sessions, but o'neill definitely has an argument i can consider, for hanging on to 'stuff' "I like a sense of humanity in a home; the more you exhibit of yourself in a room, the more interesting that room will be. Design is all about really living in rooms. It's probably more chic, more fashionable, and more adult for me to live in a pared-down environment, but that's just not me. I have too much to say; I can't keep it all in. I've tried to not like stuff, but face it-I just like stuff" all photos, john m. hall, courtesy of designing women; interiors by leading style makers
Email Post
Labels: interior design new york designers

Mrs. Blandings said…
I adore a home this personal. It's also why I loved the John Derian layout in ED a few years ago that made people so crazy. You could see him all over it. Perfect.
Tuesday, October 14, 2008 at 2:06:00 PM PDT

katiedid said…
I have to agree. I am a stuff lover.Learning how to arrrange it as beautifully as this may take some doing however.
Tuesday, October 14, 2008 at 3:00:00 PM PDT

northsidefour said…
This makes me feel so much better about my piles, clearly I just have too much to say, lord knows that is true.
Tuesday, October 14, 2008 at 3:19:00 PM PDT

Anonymous said…
adore it all. i want to scream "ditto" to you all the way from here. i have this book and have always loved it. glad the world of design is taking on personality and rooms aren't getting by looking like "showrooms" anymore. brilliant post!
e
Tuesday, October 14, 2008 at 3:27:00 PM PDT

Pigtown*Design said…
I got rid of two huge bags of magazines this weekend. felt a lot better. there's still tons to go. and i've only lived in my house for two years.
Tuesday, October 14, 2008 at 3:32:00 PM PDT

Unknown said…
I love your style and enjoying visiting your blog. Speaking of more stuff--you've turned me on to esty with all of your fabulous finds.
Tuesday, October 14, 2008 at 4:16:00 PM PDT

Karen @ BonjourBruxelles said…
This reminds me of those ISpy books. And not necessarily a bad thing. Keep looking and you'll find something you can really latch on to.
Tuesday, October 14, 2008 at 4:24:00 PM PDT

Anonymous said…
I'm not just guilty of hoarding stuff, I'm guilty of hoarding an actual file folder in my tear sheets labelled "Ellen O'Neill." One of my old decorating books automatically falls open to a spread of her apartment in an earlier incarnation - before she moved the pastels to the shore - because I referenced it so often.
Tuesday, October 14, 2008 at 5:13:00 PM PDT

beachbungalow8 said…
lecia~
i know 'wife dressing'. I already googled it. you have to find the vintage version. The new one is not nearly as cool looking.

mama loves more~ etsy, is so great is it not? such a fantastic resource. and it seems endless with the goodies.

i think there's a fine line btwn hording and being a creative person who finds inspiration in everything visual. i hang on to old coffee cans because they're so inspirational!
Tuesday, October 14, 2008 at 6:54:00 PM PDT

Courtney said…
Great post Megan. I love it! This sort of home is my heaven...JJ's hell. He seriously has nightmares that one day our house is going to be all cluttered and layered and looking like a crazy person lives there; the sooner the better for me!

So much love can be felt even just looking at these photos. I always wish I could spends days with people like this just listening to their stories and travels!
Tuesday, October 14, 2008 at 6:59:00 PM PDT

Unknown said…
It's amazing to me how even someone so successful in the world of design feels the pressure to conform. I love her true style and quirky sensibility. Thanks for sharing.
J
Tuesday, October 14, 2008 at 9:25:00 PM PDT

Anonymous said…
"the more you exhibit of yourself in a room, the more interesting that room will be."

Karena said…
Megan, this is wonderful, for some reason I just love the fireplace screen, so simple.The coffee table on cigar boxes,I end up with so many magazines and need to start taking out the tear sheets I crave, and then tossing!
Wednesday, October 15, 2008 at 6:58:00 AM PDT

beachbungalow8 said…
i really think {and so do many} that she's crazy~talented. But she's a visual person, she needs a lot around her. it's organized chaos. i totally understand this!

and anon, that quote doesn't say that the interesting room will be an attractive room. just...interesting.
Wednesday, October 15, 2008 at 7:00:00 AM PDT

Anonymous said…
Thanks for letting us know about E. O. Maybe a bit too much for me to actually LIVE with but I'd rather learn from and enjoy her "organized chaos" than gaze at another beautiful room that could be an advertisement fot Lauren or Pottery Barn. Your blog is great.
Wednesday, October 15, 2008 at 8:05:00 AM PDT

Tracey said…
I love this apartment and enviously drooled at it all - but then I spotted the Birkin bag and realised that this is someone with limitless money (!)and can buy anything and everything that takes her fancy and then I'm not so sure. I prefer seeing apartments where people are clever and creative on a budget. Thanks for visiting my blog - I feel honoured because I love your blog so much!
Wednesday, October 15, 2008 at 11:36:00 PM PDT

beachbungalow8 said…
tracey...i TOTALLY agree!! i was wondering who would pick up on that! and it looks brand spanking new (or else she just unfurled it from its canal street, plastic wrap~which i doubt)
Thursday, October 16, 2008 at 7:36:00 AM PDT

Visual Vamp said…
Here's the deal: A visual person is a magnet for stuff. Your talent leads you to the design world, where you are influenced by the magazines and books that hire you. You wan to know if you can produce something slick, so you try it. Okay so now you did it, and you sit around looking at a perfect picture, and maybe even get that picture in a book or magazine. Now what? You get your stuff back, the stuff that's the essence of you. No matter how talented or succesful we are, we all look for approval, which leads us to changing things up. Change is cool, and part of our creative process, but never lose the stuff of who you are kids.
xo xo xo
Thursday, October 16, 2008 at 9:03:00 AM PDT

Unknown said…
I have the same book and always remember that story, your house has to reflects you not to follow a trend that has nothing to do with you!
Great post!!!!
Friday, October 17, 2008 at 5:23:00 AM PDT