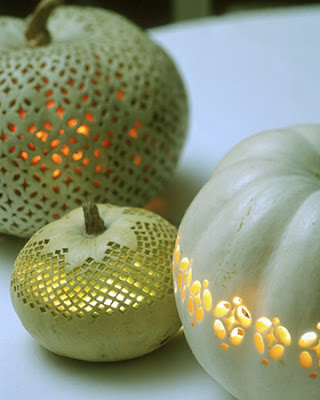 photo cred: martha stewart via aphrochic on flickr
Last year, around this time, I posted some great recipes and photos, giving total: credit, praise, snap-finger-gun-winks and long meaningful blog hugs etc. where they were due ~ along with a link to the source. A few days later, the author of the recipes emailed me and asked me not to use them.
actually the email kind of went something like this {in caps}: " HEY! BEACH BUNGALOW 8 YOU CAN'T JUST TAKE MY RECIPES WITHOUT MY PERMISSION AND THEN GO PUT THEM ON YOUR BLOG!!!!" did you know this? recipes are copyrighted? Seriously, I didn't know recipes were considered literature. 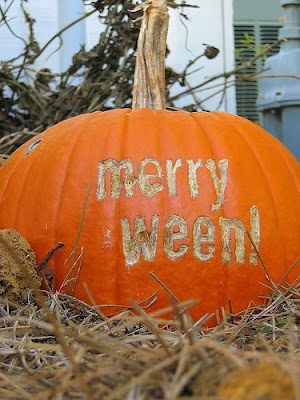 photo cred: sarah leeab on flickr
Red cheeked, palms up, head tilted in my best mea culpa stance, I removed it all {except for the photos, the source was ok with the photos} and, people, I won't do that again. ever. I won't even mention the site...which is actually quite good. Instead I'll share with you my very own, recipes given willfully by my friends~ the great pumpkin seed laureates themselves: 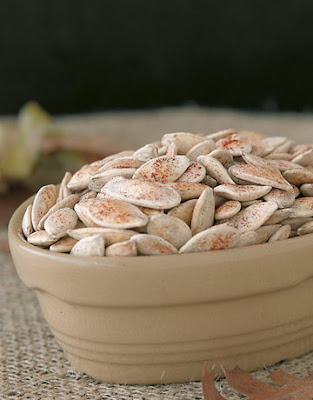 Analisa: "I just kind of wing it. lil butter, salt, sometimes spices... actually, Tanner did a bunch of different kinds...chili or cayenne pepper for spicy, cinnamon and sugar for sweet, garlic salt, and the list goes on." ~Yum! thanks Ana, sounds like Tanner's some cook! Ally: "Clean the seeds, rinse and leave in a colander for a few hours, spread out on a baking sheet, cover and cover and cover with salt, and more salt and roast in the oven, I think I did a lower temp, maybe 250, for about an hour. Stinky breath, ooh wee, stinky stinky stinky. But so tasty." ~Ally, fellow sister in the Over Sensitive Olfactory Sorority, if the whole party is eating them...who cares? Ann: " I just put mine on a cookie sheet with olive oil and kosher salt until they are a little toasted and slightly brown and they are yummy!" 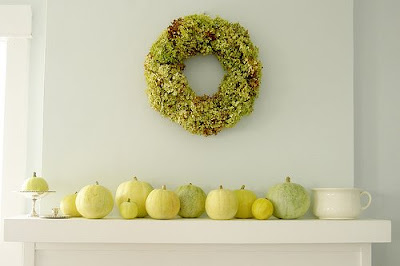 photo cred: melissann on flickr
and finally my recipe:

clean the goobies off of the seeds

place in a bowl and toss with melted butter and any spice that suits your fancy. Salty and sweet is good, as are Cajun spices or Indian spices {I've even heard of ground black tea used here}

spread out on cookie sheet {if you're patient, let dry over night~ I have no patience}

bake in preheated 300 degree oven for at least 30 minutes 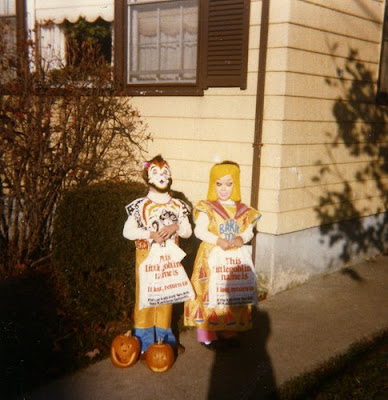 High-Heeled Foot in the door said…
Oh thanks for the heads up. I had no idea that you couldn't post recipes.

On a side note I love those pumpkins in the first picture. They are amazing. It must take hours to do.

beachbungalow8 said…
I seriously, meant no harm in the reprint of those recipes! I just wanted to share the goodness. oops.
Tuesday, October 28, 2008 at 8:01:00 AM PDT

Style Court said…
I still have the Martha Stewart book with those pierced pumpkins. Just amazing.
Tuesday, October 28, 2008 at 8:13:00 AM PDT

Anonymous said…
Hey, ya know what? Books and journal articles are copyrighted. And ya know what else? You can use them as long as you cite them. People do that everyday, from high school students to scientists. I think you can use almost anything, as long as you cite it. Like photos. Or quotes from a book. You just can't say that it's your own, because that would be plagiarism, and plagiarism is illegal. I'll research it for you, sister.
Tuesday, October 28, 2008 at 11:09:00 AM PDT

Unknown said…
It's a shame some people just don't want to share, even when given due credit! I absolutely love those pumpkins in the first picture. I want some!
Tuesday, October 28, 2008 at 11:20:00 AM PDT

beachbungalow8 said…
I actually did research on this. From what I can tell, you can post ingredients but not the exact directions. In other words if I was a completely jerk, I could have just rewritten the directions and been golden.

but what's so funny to me, is that we're talking about roasting SEEDS!!!.

Unknown said…
I don't know how I feel about my own stuff. I've seen my photos on other blogs but in some ways, I'm just delighted that they cared enough to share them with their readers. Recipes, I'm happy to share but I guess everyone has their own ethics and feelings. I found your blog when I googled Santa Monica Flea Market. We are moving to this area in February.
Tuesday, October 28, 2008 at 12:19:00 PM PDT

Ivy Lane said…
"ALL CAPS LADY" should have been flattered that someone took the time to look up her recipes and pass them on! People should really lighten up!!! :)

Great pics and will definitely try some of the recipes from today's post!! :)

katiedid said…
We are about to start carving a coupla BIG pumpkins....so this info will come in very handy. Thanks!!! I guess I better take those recipes I quoted on my blog off before the CAPS lady alerts the recipe police.Eek!
Tuesday, October 28, 2008 at 2:19:00 PM PDT

Karen @ BonjourBruxelles said…
I'm posting this on all the internets! Every single last one of them!

So, back to the seeds: once the roasting frenzy is over, how long do you leave them in a bowl on your counter? I've been known to go nearly a week while they remain untouched as the chocolate/candy frenzy has taken over.
Tuesday, October 28, 2008 at 2:26:00 PM PDT

cassandra said…
don't you love getting the 'call out' emails? in ALL CAPS? hilarious. i had no idea about the recipes either... good thing i don't use them on my blog! love the punkins from martha! i have to carve mine tonight... perhaps i'll be saving some seeds this time!
Tuesday, October 28, 2008 at 3:24:00 PM PDT

Karena said…
Too funny, isn't it amazing what some people get all worked up about! The sharing of the blogging community is so phenominal and it is great to give!
Tuesday, October 28, 2008 at 5:05:00 PM PDT

cotedetexas said…
A year later and you're still mad! too funny!!!! you know I'd be miffed too - emailing you for advice. What a loss to that lady. Everyone needs to calm own about copyrigths - it's all such b.s. I'm still loving your kitchen pictures.
Tuesday, October 28, 2008 at 6:25:00 PM PDT

beachy in the burbs said…
I had no idea about the recipes. Sheesh. Love the pumpkin pics! I have three measley little white ones in our tiny condo here. Not much but I still love 'em! :)
Wednesday, October 29, 2008 at 8:31:00 AM PDT

Visual Vamp said…
Blogging is the wild west.
How many images are out there, that don't have a credit (that you can pass along).
And who really cares?
And if the person who already got paid and credited in some magazine or book, wants credit on our harmless blogs - fine - we'll give it.
And if a fellow blogger wants to know about a photo credit, fine, we'll give it if we have it.
Bloggers are good people.
And f**cking recipes???? Sheesh! You gave the girl credit (and she didn't have to ask you for it ha ha) on one of the grooviest happening blogs out there - she should be thanking you!
And a pumpkin seed recipe? She must be smoking them or something to have such an over sensitive reaction.
You have nothing to mea culpa about!
NOTHING!
xo xo
PS Love the punkin' fotos too!!!
Wednesday, October 29, 2008 at 8:39:00 AM PDT

beachbungalow8 said…
Vis Vamp....I KNOW!! smoking SOMETHING. You know, when I first got that email, it sounded so funny. really? seeds and some spices? really?

Honestly, I hate stepping on toes...so I felt a little bad. But she's some kind of serious about her pumpkin seeds.

annechovie said…
Gosh it's sad people can be so petty and not just appreciate the mention, and take it as flattery. I recently had an angry buddhist use one of my quote posters to illustrate ignorance, because of my positive outlook. You know what? I sent him a thank you note, cause even though he was hatin' on me, at least he gave me credit and a link. LOL. Really, I thought the whole blogging world was all about community and the the free dispersion of info to benefit the masses!? Whatever the source, I love pumpkin seeds and am thankful for some new recipes/ideas to try.

P.S. Also, PLEASE do illustrate your bungalow for Christmas and let me see it! I have seen your work and I love it and would love to see you do your own house.
Thursday, October 30, 2008 at 9:17:00 AM PDT

beachbungalow8 said…
I thought buddhism was about the positive? wow, you taught them a thing.

As mother always used to remind me in highschool, regarding social angst: start worrying when they QUIT talking about you.