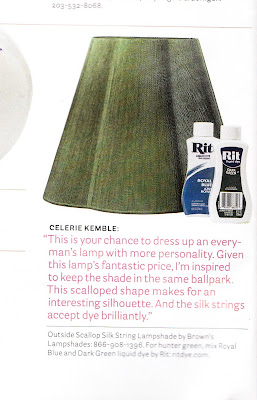 photo, poorly scanned from the 2/10 house beautiful
Right after I attempt Celerie Kemble's, great idea to dye a silk lampshade, I'm going to attempt this: 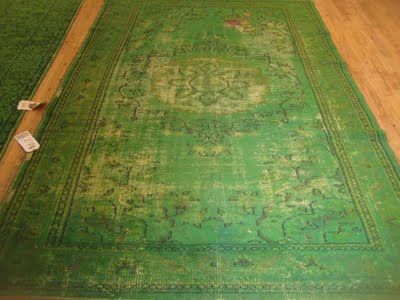 But for those of you not as brave as myself, check out the ABC Carpet & Home's 'Color Reform' rug line. ABC, features discarded imperfect, vintage, turkish rugs that have been bleached {using a lemon juice based bleach -for all of you environmental police } and re-dyed {using something called 'synthetic and non toxic' which a new oxymoron for me - but I love and trust ABC carpet }. 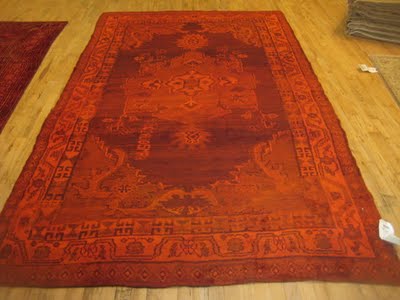 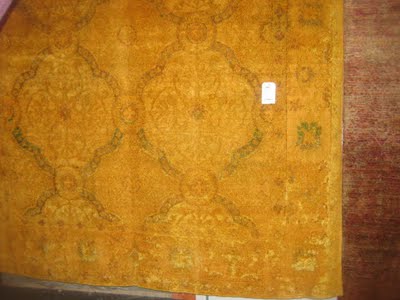 Photos provide by Joe Siscelli/ABC Carpet and Home found at orchid studio.com.... I've received so many emails, this morning, asking me how I was going to actually dye the lamp shade! You know, the process. When I wrote that, I was kidding. If I tried this, I'd have dye on my forehead and a smeary mess that looked like I used Magic Markers. So, to answer your questions, I went right to the source. I emailed Celerie Kemble and here are her instructions: "The only trick I can share on the dying is to wear gloves! It is an ugly mess for weeks if you don't. But it works and is relatively easy. The color mix in the house beautiful story turned out a bit dingier than I had planned so tinker with the colors and test on some papers first -- it is a great way to get a cheap but very custom colored shade. " ok, I think I can do this. If you try it, will you send me photos? I'd love to see the outcome.
Email Post
Labels: celerie kemble diy rugs

debra @ 5th and state said…
megan, so glad you posted on the celerie lamp shades!

when i saw the results but no instruction was disappointed. good luck and do share your results.

Amanda said…
I can't WAIT to see what it looks like. I have so many outdated antique rugs in my repertoire it's ridiculous. Let us know what happens!
Wednesday, January 13, 2010 at 8:03:00 AM PST

TERI REES WANG said…
I have a friend who used to throw the slip cover to her sofas in the washing machine every other week, trying to find the color that suited her. Change is good.
Wednesday, January 13, 2010 at 9:05:00 AM PST

mary said…
The rugs are gorgeous. But good luck on that project--I believe you will need and huge amount of space and infinite patience (and a little luck).
Wednesday, January 13, 2010 at 9:15:00 AM PST

Riviera Boardwalk said…
So let me make sure I am understanding you. You are going to die a lampshade with Rit Die? I have never had good luck with die. I can't wait to see the end result and the instructions on how you make this work.
xoxo,
nancy
Wednesday, January 13, 2010 at 10:36:00 AM PST

beachbungalow8 said…
Riveria: oh hell, to the no,I doubt I'll be trying this, but PLEASE somebody do this and get back to me.

I think if you don't use silk, or a natural fabric, you'll run the risk of super blotchy, weird inconsistant coloration.
Wednesday, January 13, 2010 at 12:01:00 PM PST

Anonymous said…
Been obsessed with these rugs for months now!
Can't wait to see the results, and hear any tips. I want to try this in the spring when New England thawas out as it seems to be an outside project
Sunday, January 17, 2010 at 4:58:00 PM PST