Living in a bungalow has had its ups and downs. The upside is that the, diminutive, central living space is on one floor. The down side, is that, we're all on top of each other. A close knit family that sometimes wants to unravel because of those pearls/purls. But it has its charm and history. 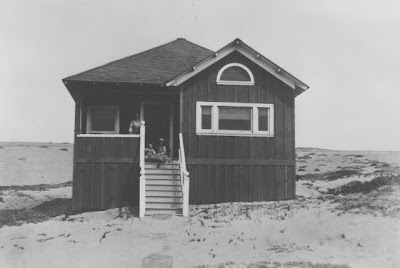 manhattan beach cottage, 1902 torn down in 1987. here is this same location, as it looks today.

Once upon a time, this little beach town was nothing more than sand dunes dotted with these charming beach houses. The one I live in was built with the intention of summer use by those who lived inland, like Pasadena and other places that soared with heat in those hot summer months. They were built with small galley kitchens and maybe 2 bedrooms- one for the children and one for the parents. 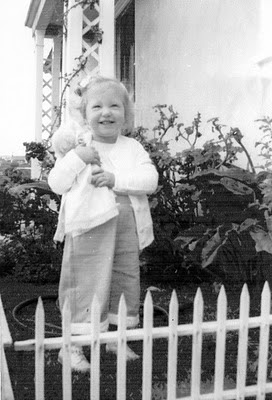 Over the years, one by one, these bungalows have disappeared giving way to larger...much larger homes. Homes, I suppose that are more suitable for modern lifestyles.

a little, bungalow, back history:
In the late 19th century, the bungalow style house spread in popularity across America. With its beginnings in India, as small, single family homes, the structures eventually became holiday homes for the British Colonists. In time the idea of making these, small homes into year round dwellings gained popularity. Over the years, architects have used the bungalow concept as an inspiration to recreate varying versions of the original holiday house. 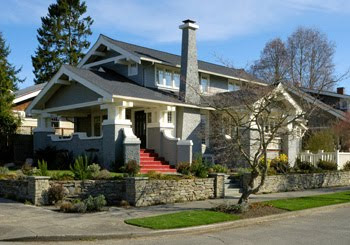 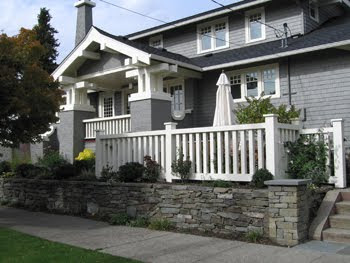 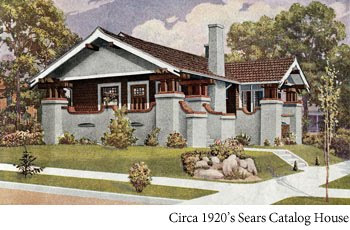 A second story was added by architectural firm, Bosworth Hoedmaker, maintaining the integrity of the design while adding space. 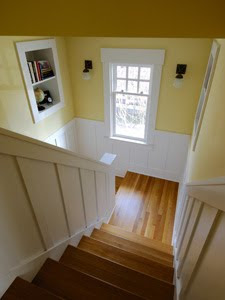 factoid to add to your useless knowledge bank: Chicago, sometimes known as the 'bungalow belt' is home to more bungalows than any other type of architecture. There are approximately 80,000 within the city limits alone. 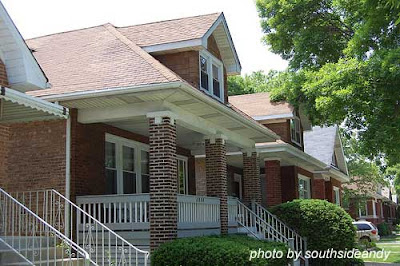 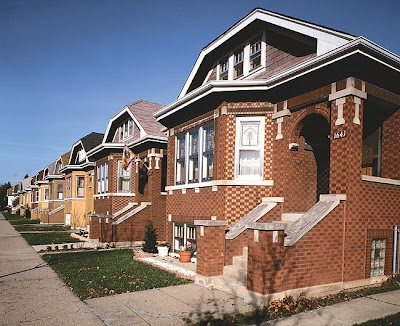 Chicago bungalows are usually brick and have the distinctive design element of the roof gable being parallel rather than perpendicular to the street. 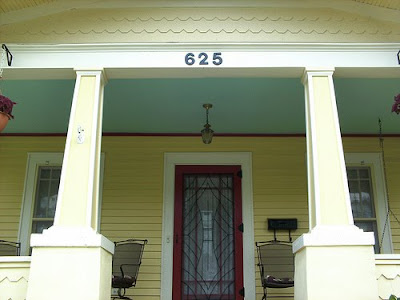 another notable: most bungalows have a distinctive front porch and a low roof line. 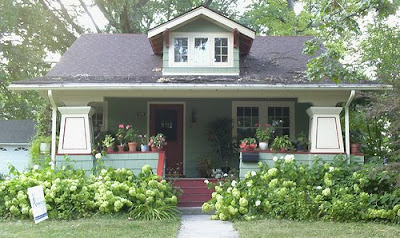 the large front porch created community among neighbors, as a place to sit and visit. 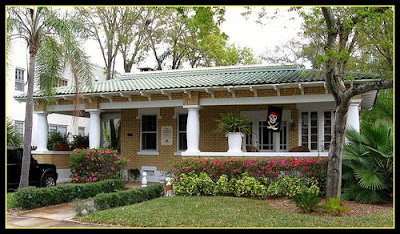 this is my kind of bungalow... 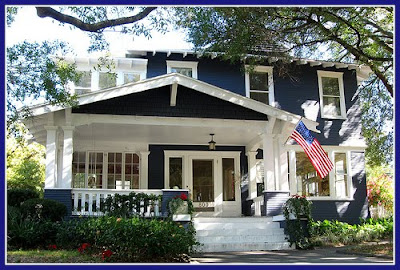 It looks like maybe it was added onto? check out all of those windows! I can only imagine how beautiful the light is in those two front rooms. 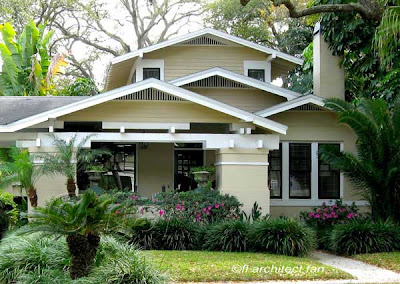 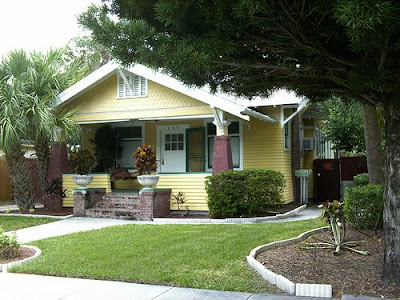 While the bungalow was introduced to California in the late 19th century, the fad spread up to our Canadian cousins over the next 10 years. Houses like these Ontario, Canada bungalows, started showing up around the early teens. 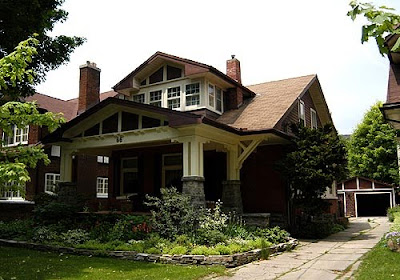 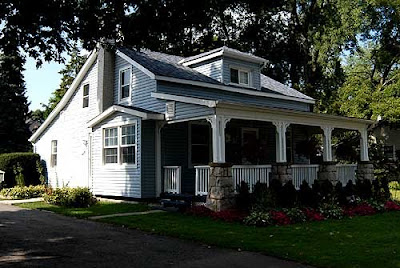 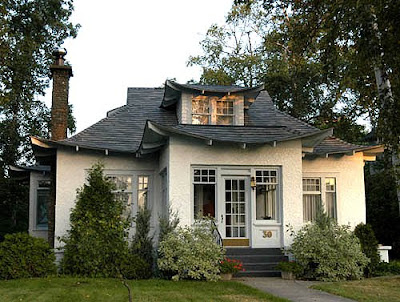 above, another example of the 'pagoda' or 'aeroplane' bungalow. I love these. They're so quirky. 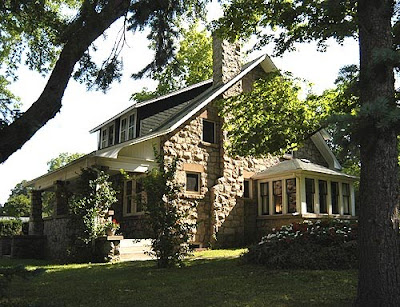 all of the limestone ( i think?) above reminds me of the bungalows found in the Kansas City, Missouri area . I'm always a sucker for vintage ephemera. It's great to see these homes as they were intended. 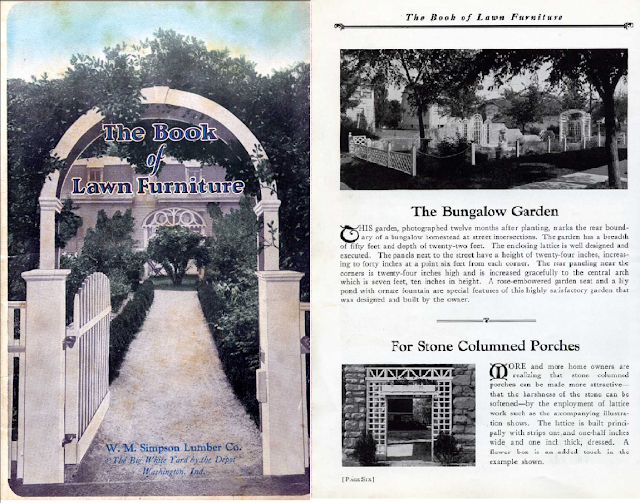 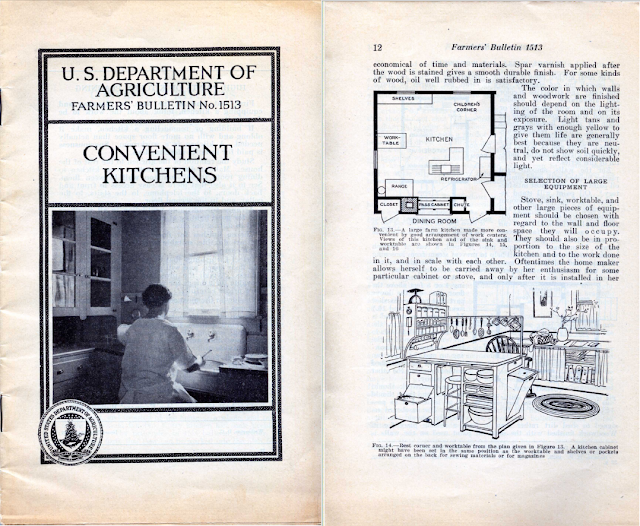 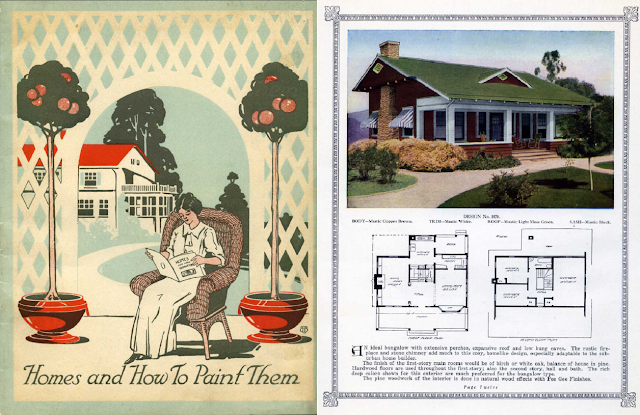 Karena said…
Megan, love bungalows. You already know there are many in Kansas City!!

the red bungalow said…
I love this post...it makes me really want a front porch to sit and entertain. :)

Marija said…
Love this post, Megan! I grew up in a Chicago bungalow on a street filled with nothing but brick bungalows with large front porches. Some of my best memories are sitting on that front porch with neighbors and friends and though it was nothing fancy, it was totally cool. There is a revival of this style going on in Chicago including incentives for maintaining the architectural integrity of these homes. Love it.

ArchitectDesign™ said…
I love bungalows and small houses in general. I remember hours spent pouring over an old sears homeplans book as a kid. Actually just this past weekend I picked up a fantastic little Dover book with 'fabulous small house plans from the 1920s'. I guess I just like cozy...and a front porch is icing on the cake!
Thursday, April 22, 2010 at 6:48:00 AM PDT

Mrs. Blandings said…
There is no more welcoming sight than a street of bungalows. I often think that if I had remained single I would have owned one.
Thursday, April 22, 2010 at 6:51:00 AM PDT

Momdaw said…
I believe that Sears Roebuck actually sold bungalow kits. Somewhere I saw a catalog of their bungalow line.
Thursday, April 22, 2010 at 8:52:00 AM PDT

Helen said…
Hello there! I lived in Minneapolis for 24 years ~ there are also many wonderful bungalows there too. Loved your post today!
Thursday, April 22, 2010 at 9:10:00 AM PDT

beachbungalow8 said…
this is such a funny accident of a post that ended up well received. I was looking up the "pagoda" style bungalow initially. I wasn't familiar with that style before I had seen these photos. What I unearthed was SO Much information.

I tried to winnow it all down to the basic facts that I thought were of interest.

But what I love is that so many of you said the same thing about how the bungalow style evokes such a warm happy feeling. And these are not grand structures. They are simple in their construction and about community and closeness.

Erika Peterson said…
I want a little bungalow of my own someday! This is the one I have my eyes on: http://petesspeaks.blogspot.com/2010/03/long-term-to-buy-list.html

Ann said…
Megan - I'm behind in reading as I've been traveling but I love this post. It's incrediable you have a picture of someone who lived there. I have a little history on our house but would love to know who the original owners are....what a great post.
Thursday, April 22, 2010 at 4:30:00 PM PDT

RG _ into the studio said…
Hi Megan, this post got all my attention! I loved to learn more about the history of the bungalows... I always dream about owning one at some beach town in some place... By the way, why do you call your blog "Beach Bungalow 8"?
Saturday, April 24, 2010 at 8:04:00 PM PDT

Anonymous said…
Would love to see some Portland, Oregon bungalows. I have heard they have the 2nd largest amount of Bungalows in the U.S. I love them all any type of bungalow.
Monday, April 26, 2010 at 2:11:00 PM PDT

24 Corners said…
Love this post!
I became enchanted with Bungalows after moving to Seattle...and the Pagoda one you show here has always been one of my favorites.
We are almost done with the building of our home and I really tried to include aspects of the Bungalow style into the house. We were supposed to have a front porch but it didn't work out...got a large arched dormer instead though...the want of light won out. We also incorporated lots of built-ins and other period details.
The charm and character Bungalows offer are so unique...how wonderful that you live in one!

I did a post not long ago on other Seattle architectural styles that influenced our home (which looks nothing like any of them) and had wanted to include Bungalows in the mix but realized they needed their own proper post...you did a wonderful job honoring them!

anne said…
Just cruising through your archives and awesome inspiration and had to comment - the middle section are all bungalows from Tampa, a neighborhood called Hyde Park!
Friday, June 18, 2010 at 12:51:00 PM PDT

bed frames said…
I definitely love this post. It reminds me of my childhood. When I was a kid me and my friends always visit our bungalow and play inside for almost the whole day. I love that day of my life.
Wednesday, July 21, 2010 at 3:03:00 AM PDT

sue said…
I live in Hyde Park (Tampa), and 2 of those homes are here. We fell in love with this neighborhood on a weekend trip here 6 years ago and bought our a 1910 bungalow on a whim. I'm curious where you got all the pictures. I love them.
Tuesday, September 7, 2010 at 7:15:00 PM PDT

beachbungalow8 said…
Hi Sue, I found these shots by googling bungalows, 'airplane bungalows' and also, there's a lot on flickr under the same titles.