It's In The Bag

Normally I don't do these blogger games. Mostly because, as I've said before, I can't imagine anyone really wanting to know what's in my fridge or what I'll be packing for my next trip. But when Ashley of A hasty life, sent me the invite to be a part of her blog crawl, the thing that reeled me in was the reciprocity. I'm always happy to promote the hard earned efforts of other bloggers.

So here it goes, what's in my bag  { minus a Rolos wrapper, a parking ticket, a broken necklace and some lint } Thanks again Ashley! 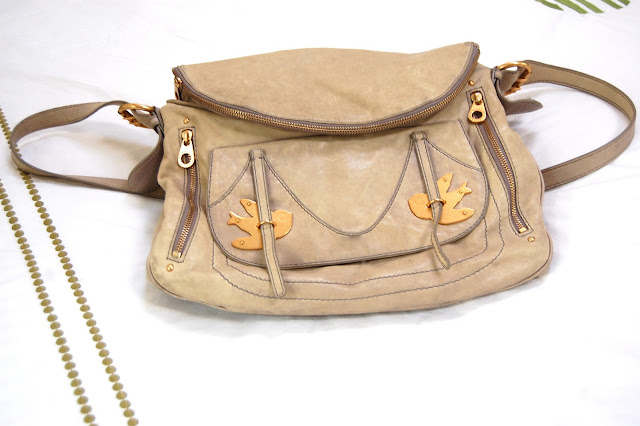 The thing is, I probably have at least 50 bags. And this doesn't include my evening bags. I have admittedly have probably too many, and rarely wear the same one over and over.  I change them throughout the week. But for the last year, this is my go-to bag more than the others. The Natasha Petal to the Metal bag by Marc Jacobs.


{note:: as much as I wanted to art direct the hell out of this. I decided to keep it real. No props were used in the making of this post. }

I like the color because, it's a great neutral for the neutral weather of So. Cal. I do not like that it's enormous and seems to swallow everything I put in to it, causing me to panic daily about the where abouts of my phone and keys. {ask Brooke Giannetti, who stood by politely one day, as I panicked and dumped the contents out on to the sidewalk outside of the cafe where we had just had lunch. I think I might have scared her } I actually looked for a lost leather jacket in it one day. None the less, I wear it,  bike messenger style on most days. 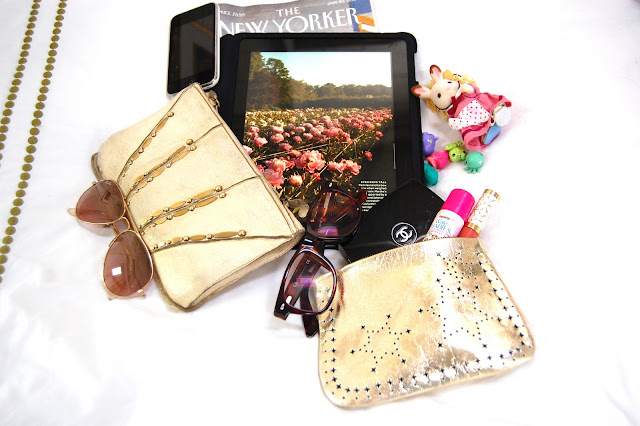 and now to the innards. clockwise-ish.

And please visit Linday's blog  From The Aisle to Aloha and on Monday, Blair's blog Wild and Precious.

Ashley Hasty said…
I'm so glad you decided to join the blog crawl! I'm flattered that you chose to join when you don't usually participate in things like this. I really enjoyed getting a peek inside your bag. I adore that gold pouch and your iPad. Do you love it as much as you thought you would?

jessicaraesommer said…
I do the accidental clutch/wallet within the bag too! So easy. Love your bag btw...

Peggy and Fritz said…
I a New Yorker girl too and they are piling up because I haven't had time to read them. Gosh, my bag would look shamful..the inside is a hot mess.
Friday, January 14, 2011 at 7:08:00 AM PST

beachbungalow8 said…
thanks for having me ashley! I love connecting people and giving forward. Happy that you gave me that opportunity!
xo

Jessica, I think my back thanks me for not hauling giant bags around everywhere

and Ann, It's only because I change my bag throughout the week that it remains pretty clean. Except for the errant toy or barrette that someone sneaks in.
Friday, January 14, 2011 at 9:04:00 AM PST