The House of Haslam 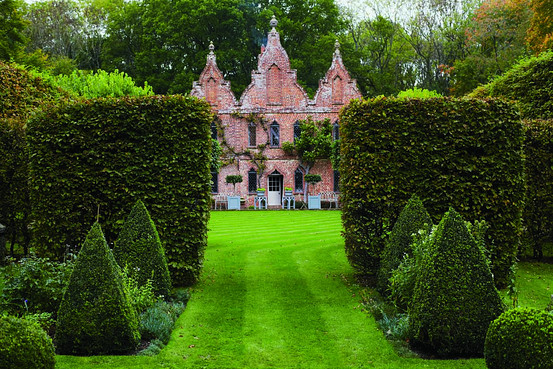 You know how French women just have that, je ne sais quoi, at any age? And that, no matter how hard the rest of us try, we never quite get it right. I think this is the way with the English Country Style. Throughout the 80s there was an English Country trend that took hold of the nation and Laura Ashley was the patron saint of frocks {and believe me, I know. I worked there } Thankfully this trend passed, because honestly, we didn't quite get it right. We behaved it, rather than inhabited it. 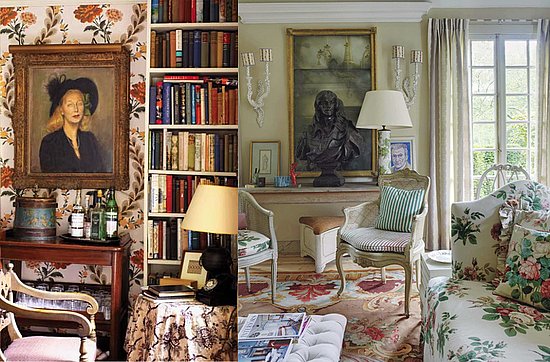 All though the, full throttle American version of "English Country" really isn't my style, when you see the real version, in the real setting, it's very charming, comfortable and lovingly filled with a cacophony of pattern, oil paintings, chintz and cabbage roses everywhere, inside and out. 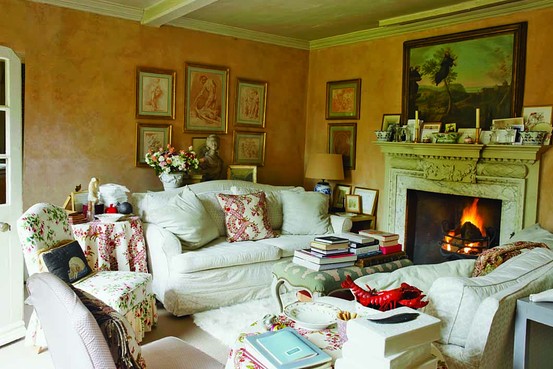 Designer Nicky Haslam's Jacobean-revival house was built for Tudor king Henry VII ....... { That would be the 16th century - which is a bit mind blowing to me } English Hunting Lodge isn't behaving like English Country, it is. And if it's not your over all style, it's filled with great little details and inspiration.

"I tend to look out for things with a resonance to my youth—artists or objects that seemed romantic all those years ago. I never buy anything purely for its value. I like possessions that smile back at me.”- Nicky Haslam 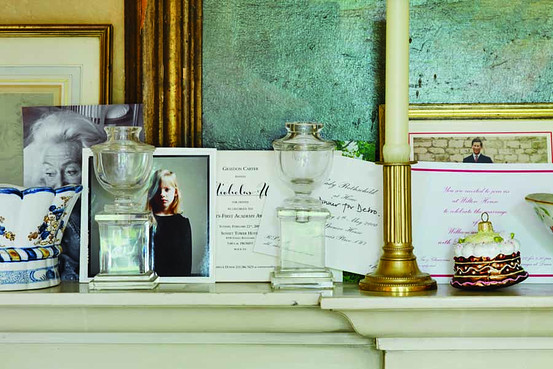 Of interesting note, the house was previously owned by Colfax and Fowler, co-founder, John Fowler. To see more photos,  hop on over to the Wall Street Journal  where writer and decorator, Rita Konig gives a great interview and grand tour with Haslamm.
Email Post
Labels: interior design

The Devoted Classicist said…
This is a great example of how a house, small but architecturally interesting, can be wonderful.
Thursday, March 31, 2011 at 4:53:00 AM PDT

Colette said…
thank you for posting megan. Rita and Simon did such a wonderful job of capturing Nicky's essence.x Colette
Thursday, March 31, 2011 at 7:09:00 AM PDT

Karen said…
Megan,
I had to laugh at the memory of the Laura Ashley days...what were we thinking? Anyway, like you, I'm happy that little trend passed. Love English style and this was fun, thanks for sharing.
karen
Thursday, March 31, 2011 at 8:41:00 AM PDT

beachbungalow8 said…
Karen, I actually worked for Laura Ashley. Meaning, I spent my early 20s (probably when my body looked its best) draped in loose, floral tents. What was I thinking?

Colette, totally agree. they did a wonderful job.

The enchanted home said…
Beautiful things do come in small packages!! I love this style..its eclectic but oh so elegant. The architectural details are what gives it such character. Beautiful!
Thursday, March 31, 2011 at 12:56:00 PM PDT

Anonymous said…
This post brought back memories. Having a mother who loved the English Country style, I grew up wearing everything Laura Ashley. I suppose I appreciated it in my own way at that young age as I cut a giant hole in one of my Laura Ashley dresses, claiming later that I needed a floral print rug for my dollhouse!
Thursday, March 31, 2011 at 2:53:00 PM PDT