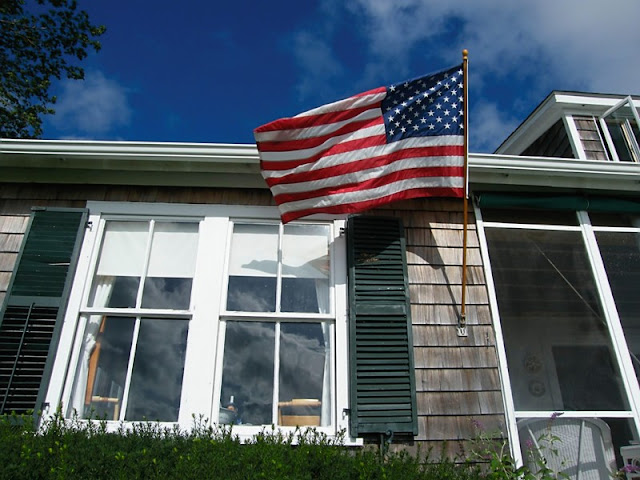 There are very few things that I love more than an old house. Especially those old dowagers that have served as a summer retreat for generations. Patiently waiting through the long quiet months of winter always ready for its family to walk in after it's been empty for a time .Waiting for its people to stand in the living room, sunlight filtering through the wavy glass panes, dust moats dancing in the beams. Waiting for the thump of the trunks being unloaded on to the front porch and that first sensory intake of  the familiarity; the  aromas of dried wood, oceany moisture and the sweet smell of aging wallpaper all sitting, waiting to be let out as the windows are opened, the sheets are taken from the furniture. . A creak here and there as the old soul stretches and settles, sighing into place ready for another summer.


It seems that these are a thing of the past as so many, want 'new' and 'decorated' these days. While those are fabulous and dreamy, there's something missing for me - th sort of soulfulness that comes from years of memories and plain old living. 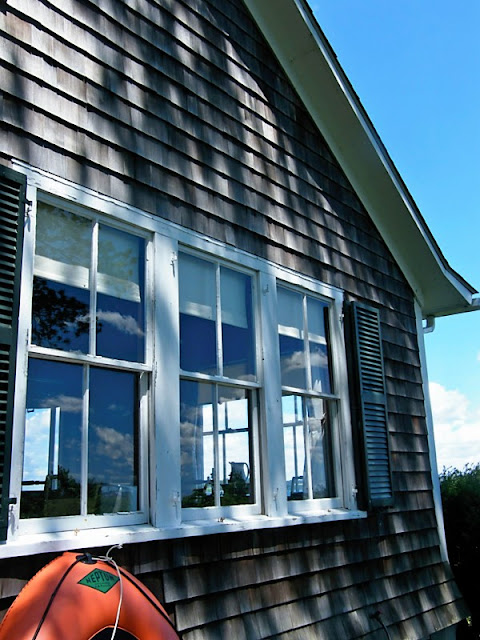 Doesn't it remind you so much of the photos from  Mary Randolph Carter's book, 'American Family Style'? 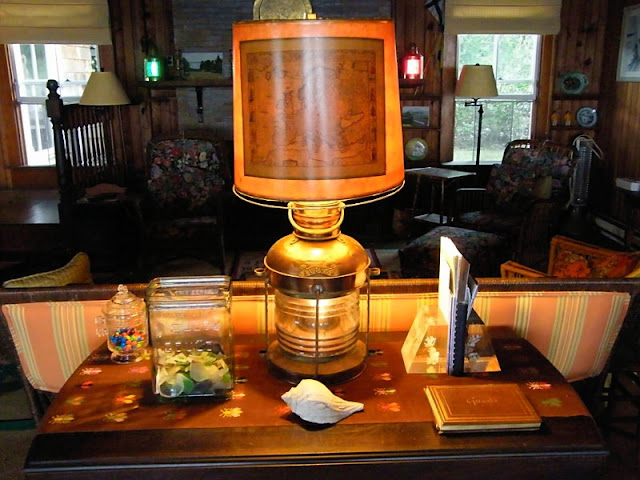 ".....it is a true summer cottage, uninsulated and unheated except for the fireplace and space heaters. It gets opened in May and closed for the winter in September. Sadly, it belongs to a dying breed of such houses and if I'm being particularly maudlin, I realize that if we were ever to have to sell the place it would most likely be seen as a teardown." 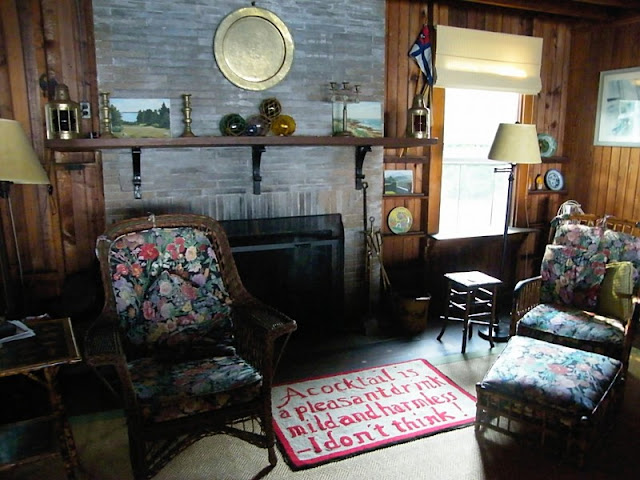 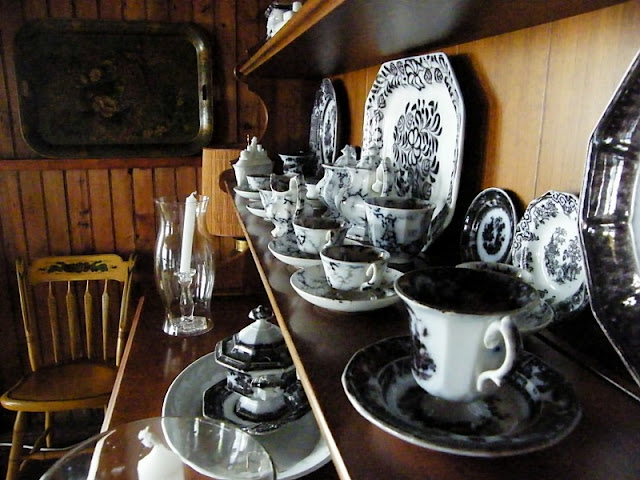 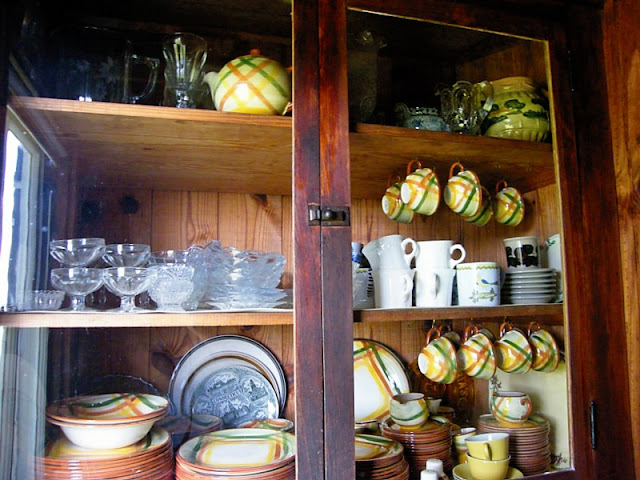 "I learned to swim there, I learned to sail there, my love of rowing and boats in general was fostered there. Beachcombing, lighthouses, lobster, clamming, birding. You name it, I can probably trace it back to this Eden." 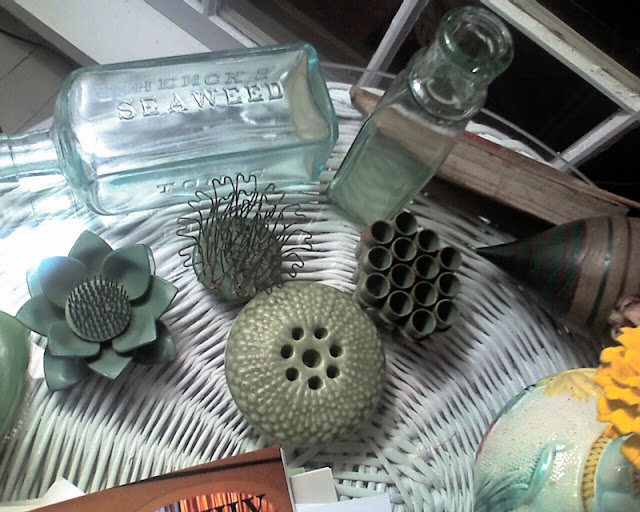 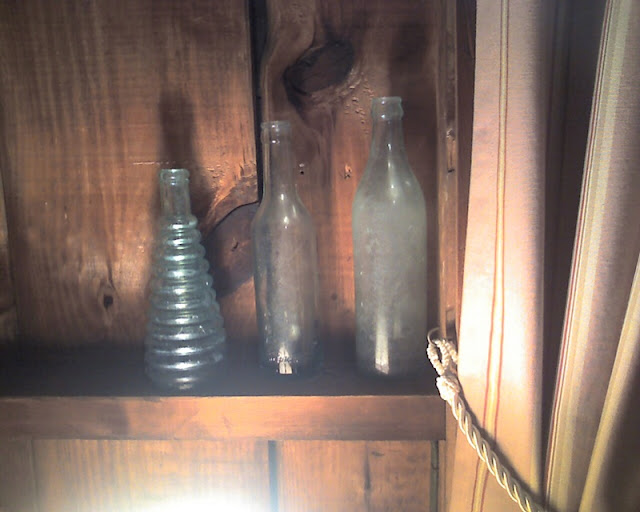 "My grandparents were both antique collectors and the house was largely furnished as a result of their foraging. There again, going to the antique stores in the area was de rigueur for any extended stay at the cottage." 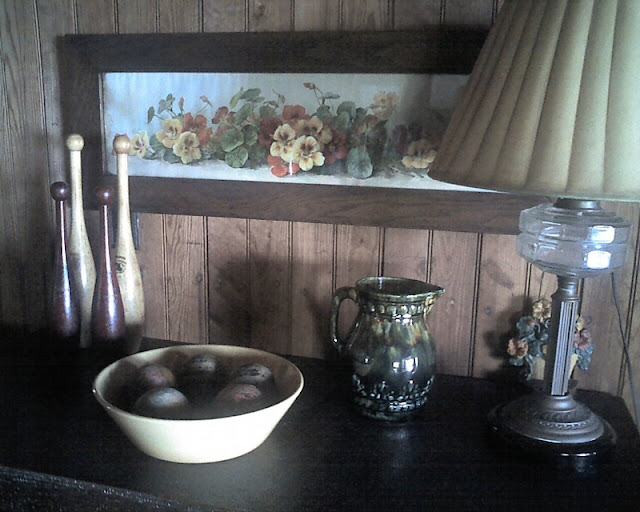 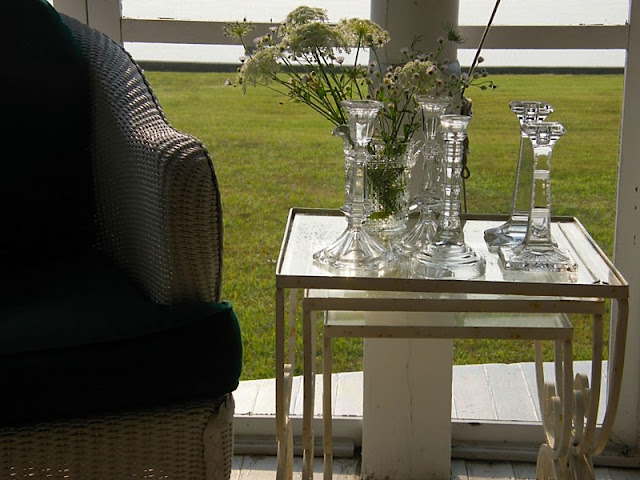 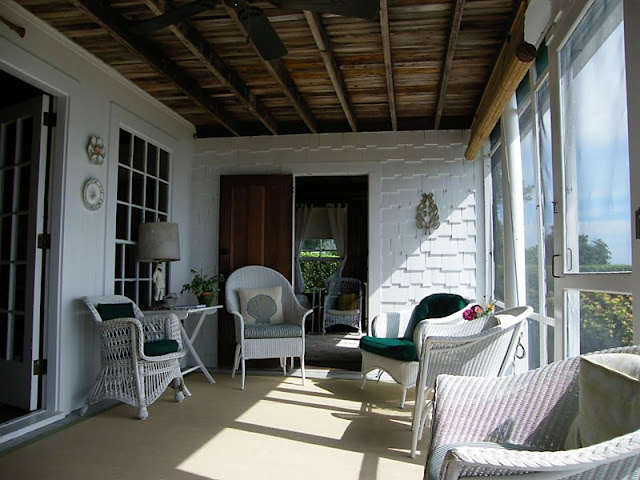 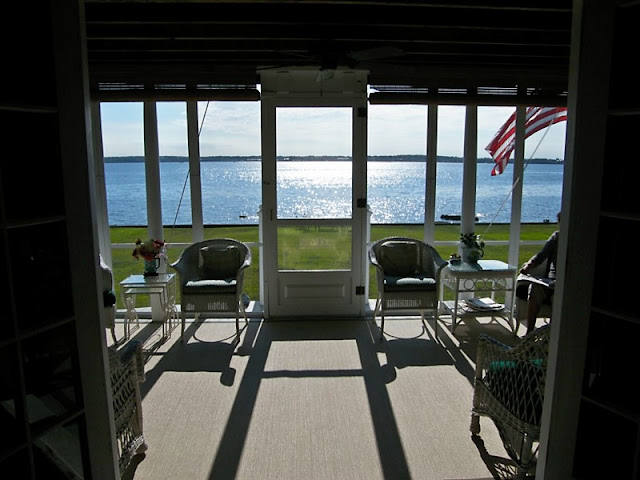 "There have been some subtle and not so subtle updates over the years. My sister and I jokingly chair The Historical Commission which presides over any changes considered for the cottage. Over the years, some changes have skirted the system and are still ruefully spoken of today by the "injured parties". Others, like the time my father innocently tried to update the anciently wonderful brass and Bakelite button lightswitches at the top and bottom of the stairs; were thwarted in the nick of time and suitable punishments were meted out by The Historical Commission." 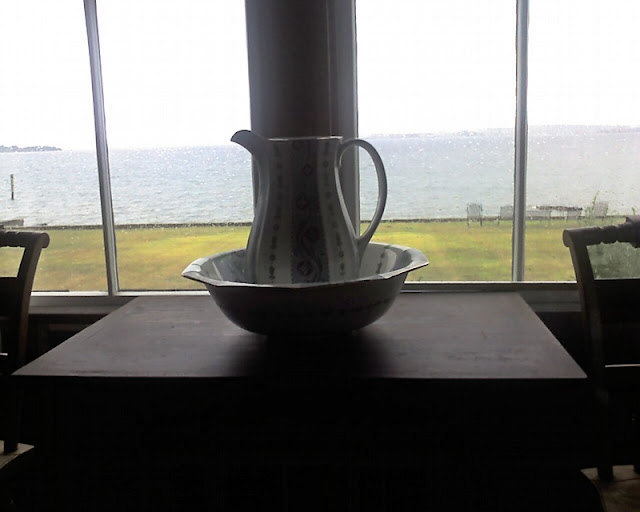 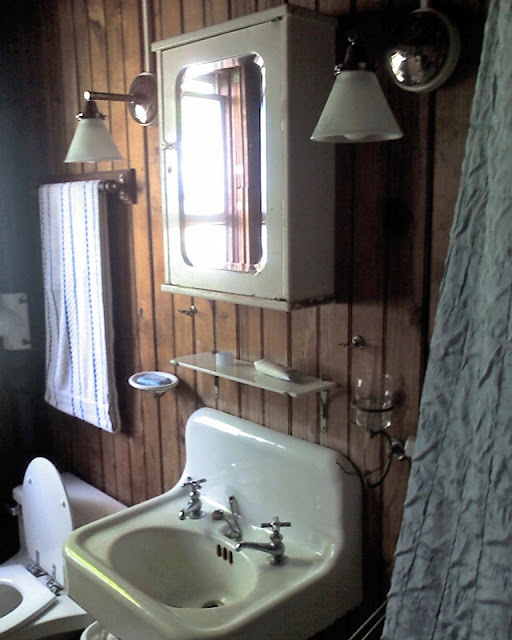 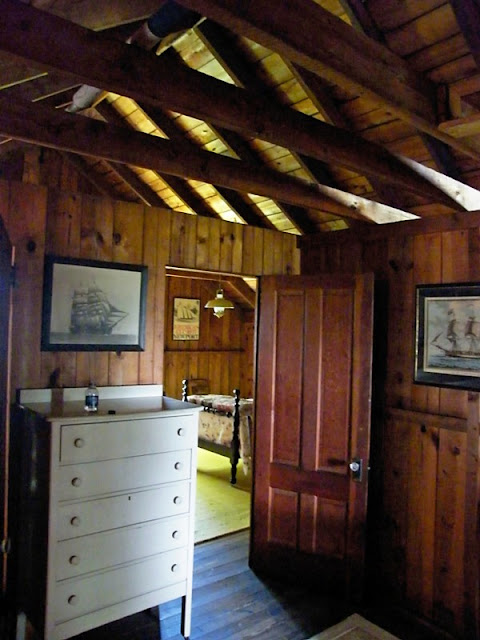 "One other cool aspect of the house is that the upstairs has no ceilings, just walls and then open to the rafters. So you can hear everything that goes on up there which is unfortunate for the bathroom-shy but made for hours of fun for us as kids, climbing as best we could, up the walls, to spy on what was going on in the next room. And lying in bed up there during a rainstorm was magical." 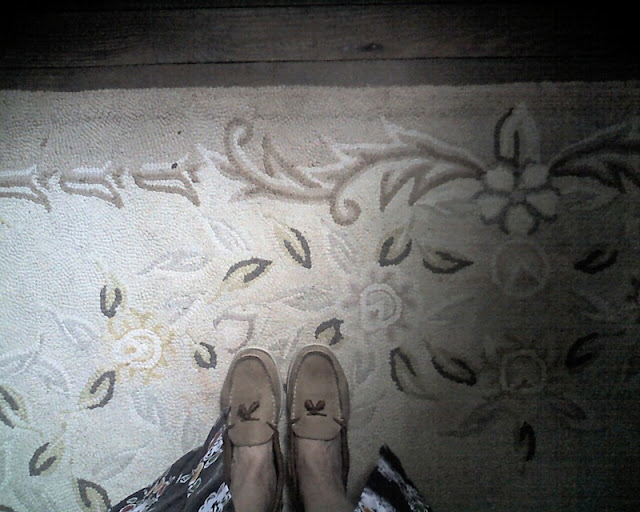 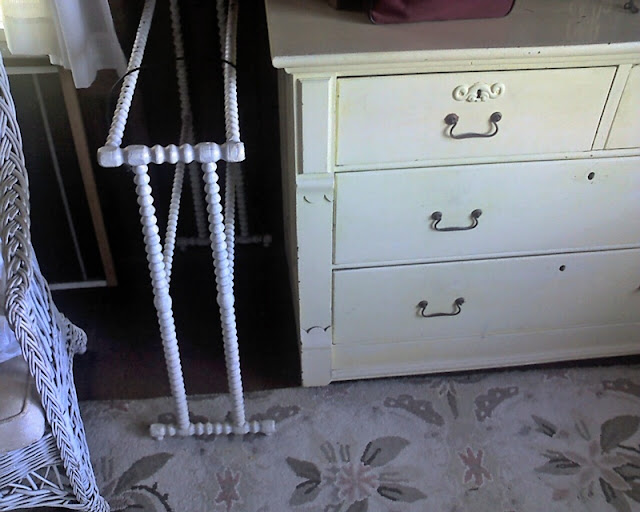 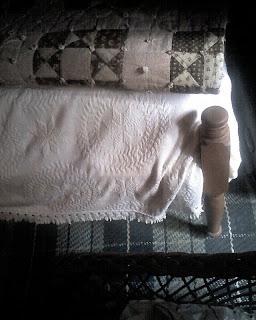 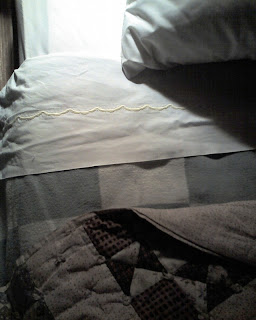 Thanks again, Sparkie. This place is magical. And I know you know (because we've discussed) you are so lucky to have this in your life.
Email Post
Labels: house tour

mauishopgirl said…
Beach cottages on the mainland have such a different feel than here in Hawaii. I'm in love with the porch and want the seafood tonic bottle badly. I usually hate the plate on the wall thang but love this one...lovely.
Thursday, October 13, 2011 at 3:56:00 PM PDT

katiedid said…
I love this. It reminds me so much of a friends beach house on Martha's Vineyard with the un-weatherized studs showing and little treasures sitting on the "shelves" between. I would love to visit there again.
Thursday, October 13, 2011 at 5:02:00 PM PDT

My Notting Hill said…
One of the best beach cottage tours ever. Loved very square inch of it. I hope they never ever sell it - it would be a cardinal sin if someone bought it and then tore it down. No, make it a moral sin as this house has a soul!
Friday, October 14, 2011 at 7:14:00 AM PDT

"Cottage By The Sea" said…
Living the dream. There is nothing like an old family cottage by the water. There is something peaceful and stress free about time worn, as well. Like you said, just waiting to be opened, the sheets taken from the furniture. A home to be enjoyed for generations. Someone is very blessed!
Friday, October 14, 2011 at 8:19:00 AM PDT

Anonymous said…
Then I guess what I really want is a tear down!! It would be difficult to leave that cozy place. They don't build them like that anymore.
Kathy
Saturday, October 15, 2011 at 6:34:00 AM PDT

Zuni, Chickadee Home Nest said…
I don't know what I enjoyed more, the tour of this wonderful home (I couldn't wait to get to the picture of the view!) or the writing about it...Beautiful trip--thank you!
Saturday, October 15, 2011 at 1:05:00 PM PDT

I am not sure you can put this fully on the builders. REAL shutters cost REAL money. In lots of cases home owners opt for more square footage than is required and the details get chopped from the budget.
I am in full agreement that details make homes.

Olivia said…
What an awesome house! And a great place to spend your childhood. I hope it stays in your family for many years to come.
Tuesday, October 18, 2011 at 9:43:00 AM PDT

Noe @ ADELLA AVENUE said…
Just loved this. I've been privileged to enjoy lots of New England summers stowing away as a guest in friends' summer homes much like this one. Just seeing these pictures has me longing for those days. Thanks!
Wednesday, October 19, 2011 at 9:11:00 PM PDT

Pat's Addition said…
What a great screened porch! What a view. I can smell the water. Bet there were wonderful parties in this house. Wish it was mine!
Wednesday, October 19, 2011 at 10:11:00 PM PDT

Unknown said…
Really love all the photos you have shared in here. So nice to live in a place like that. Enjoyed looking here. :)