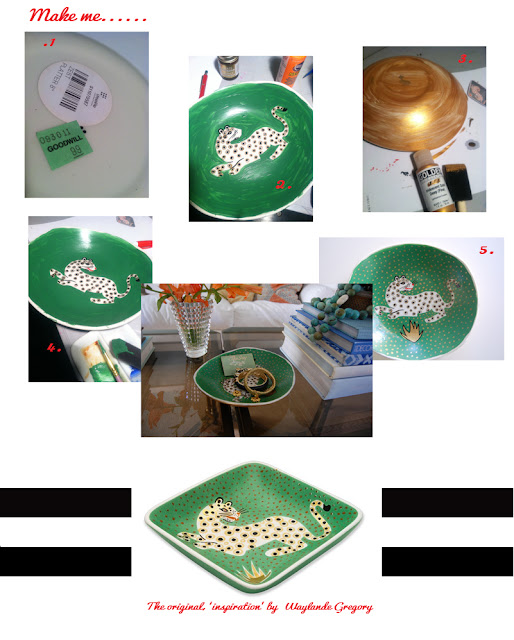 It rained in L.A.  this weekend (and my kids were both gone AND my husband was consumed by football ) So I made stuff. First up was this little dish inspired by Waylande Gregory. If you're unfamiliar with Gregory, he was a pretty prolific ceramic sculptor from the early 20th century. It's said that he, artistically help sculpt much of the art-deco visual vernacular. But, I'll let you google him if you're at all interested. His stuff is great, both modern and primitive with a mod, sort of ethnic vibe.

Anyway, I've been eyeing several pieces of his work especially the Leopard designs.  I was checking out Vivre on Saturday and suddenly realized I could probably whip up a reasonable likeness......and I'm totally happy with the outcome.

Also, I've tune in tomorrow as I'll show you what else happens when I'm wielding a gold paint pen on a lazy Saturday afternoon.......

Here's how it went down:

1. dish purchased at Goodwill for 99cents. I chose it for it's odd shape.

2. I drew the leopard design on first with a pencil. I think because this is a graphic  and almost primitive interpretation of a leopard, and not photo realistic, most of you could do the same. Just remember, keep it fluid and rather amorphous.  I then used a small brush to outline, in green paint (all colors and material are noted below) the leopard, and used a wider foam brush to fill the larger space.

3. Next, flipped it over and painted the underside gold (black might be cool too)

4. The details are the most fun part. Look at the original dot placement and copy that, using a black paint pen. Next us a red and draw in the mouth. Then ring the black dots using a gold paint pen. And you're done. I sprayed mine with a finishing coat of satin enamel.

Allison Egan said…
Oh my! well done!!! what a beautiful result - i love his pieces and now have to try this too!

Pinecone Camp said…
I can't believe you made that! It looks fantastic. Sounds like a perfect and creative weekend.
Tuesday, November 8, 2011 at 8:34:00 AM PST

ArchitectDesign™ said…
love seeing your crafts -they turned out so well. I love stuff like this.
Beware though - keep up the crafting posts and you'll become one of 'those' blogs ;-) j/k!
Tuesday, November 8, 2011 at 1:36:00 PM PST