I've been out on few sick days this week. Which I hate. It's so boring being off your game and forced into down time.  I'm not a day-time t.v. watcher either. It's creepy and dark. Reminds me of shut-ins and staying home sick from school as a kid. 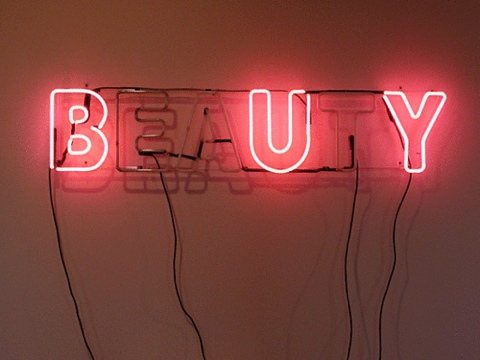 My i-pad, has been keeping me great company. Between answering emails and playing 'Draw Something' with an old friend who lives in Japan, I've been scouring the fashion blogs. I don't know why. Not really my genre nor blog niche. I think because it's a great way to disassociate when I'm not feeling my A game (which is counter intuitive, now that I think about it). It's a great way to dream a little dream of a life filled with fashion weeks and comped clothing.

Anyway, as I sat in my sweats, scrolling image after image, I came to this realization: I need these 2 following 'pieces' for Spring .  (well, a realization but also the reality that I'm the perfect pawn in the world of marketing ).   I've become totally convinced that my life won't be nearly as good without a pair of Isabel Marant kicks. 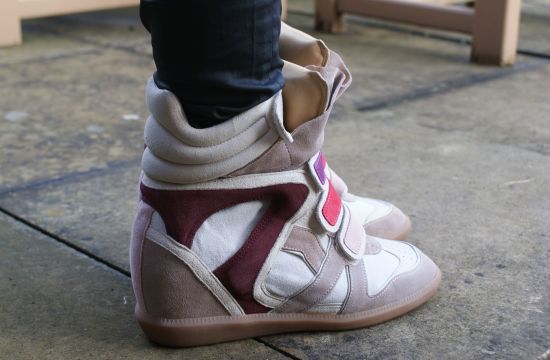 I know, what you're thinking. I thought the same at first glance. But these aren't at all like L.A. Gear.

First of all, they have an 'internal wedge'. So I can Dudley Moore myself out. And they come in an array of colors. 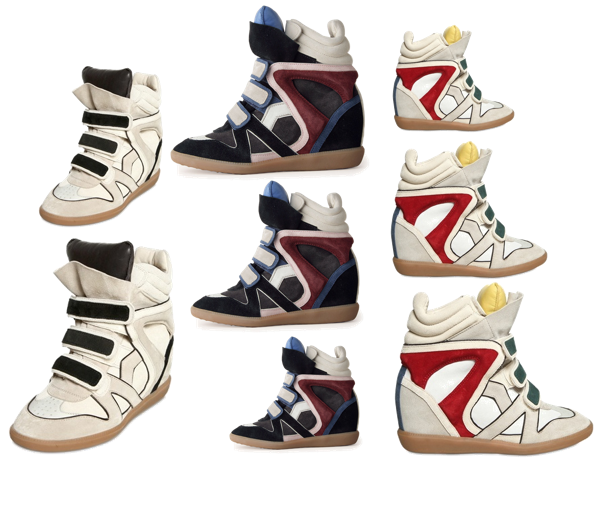 I'm telling you, if you spend two hours barraged with images of long, lean models/actresses rushing  through airports or pushing baby carriages while wearing these, you'll be convinced you need them too.   ( You may or may not even go on ebay and consider the Chinese knock-offs. But think better of it for moral reasons because you know, that they probably were made in the exact same, factory which probably employs 9 year olds who are made to work 22 hours a shift. ) 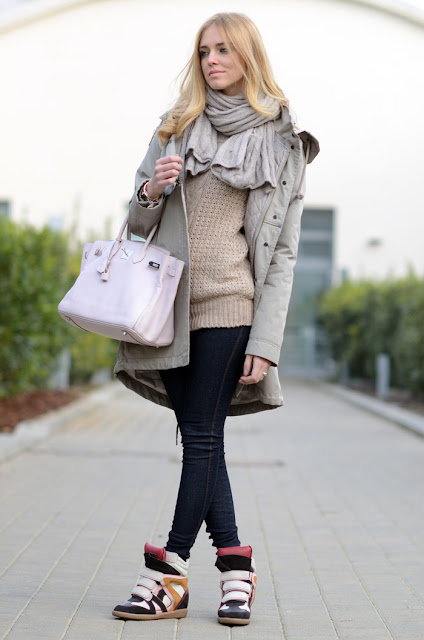 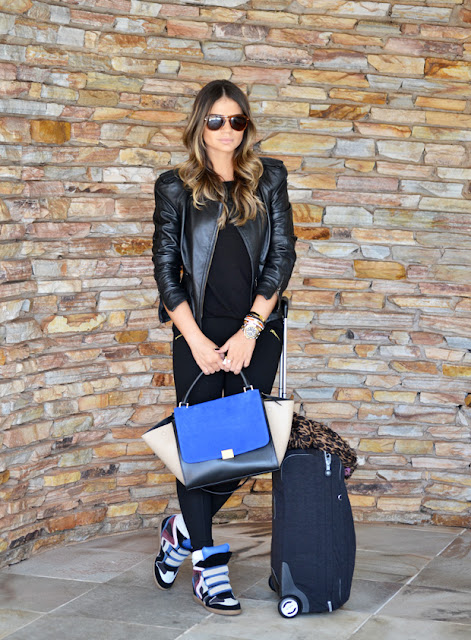 Oh and also the real things run around $680.00 give or take a hundy. (waiting for Zara to knock these off, please) down side, nobody in my daily world would really appreciate these. Sometimes, being fashion forward requires a well versed audience or else the whole thing falls on flat.

Next up on my, fever induced, 'Must Have for Spring' check list is this beautiful bag of perfection - and we all know that a shot of  highlighter neon is a must-have this season - is the mini Celine Luggage Tote in neon pink. I mean, it's obvious, this bag is beautiful. If pink's not your thing, there are several other brights from which to choose. 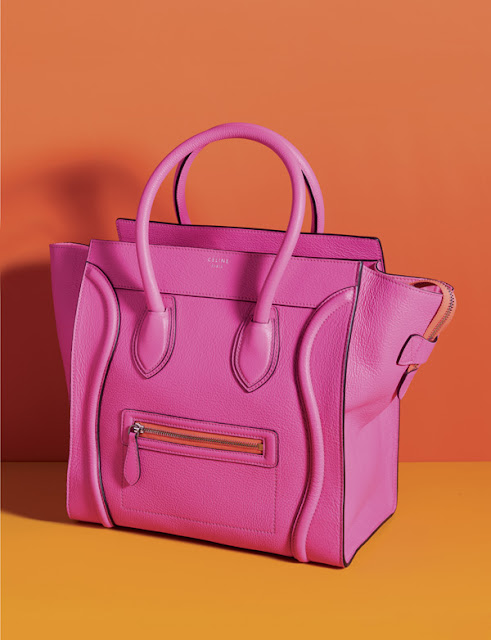 Or of course there's the less trendy and classic larger version in a neutral. 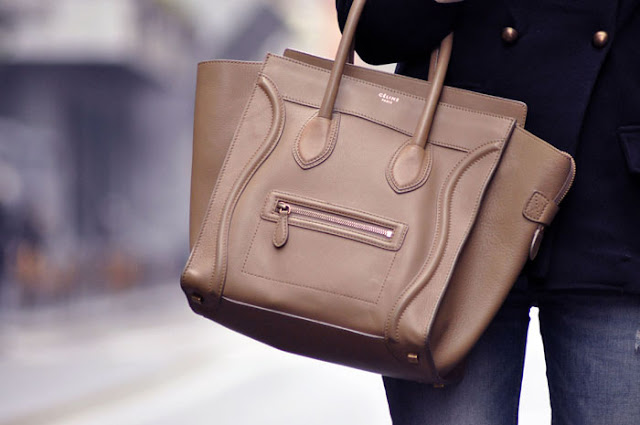 ..........and don't think that  I don't have the J.Crew knock off sitting in my shopping cart as we speak. Because, although it's no Celine, the Tillary Tote is beautiful on its own and looks like it smells leathery delicious. 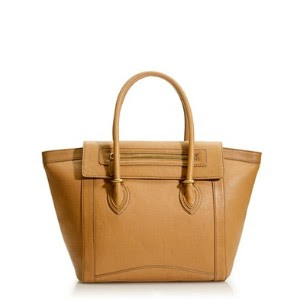 but back to that little version in a hot pink. It would look awesome with my Isabel sneakers. Or even the orange would be good..... 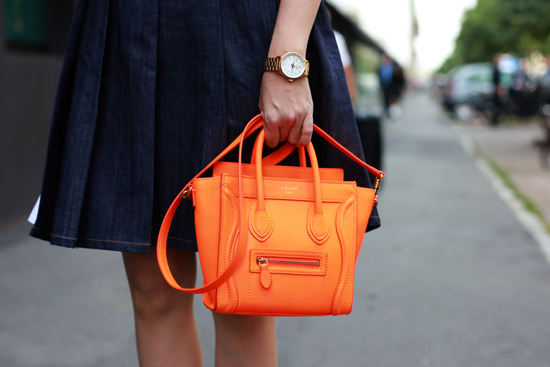 It's pricey, I don't even know how much, but it doesn't matter because I hear it's sold out.

Here's what else I've decided.. I'd like the fashion bloggers to stop calling their sunglasses 'Sunnies'. I get it, it's supposed to sound, "little girl playing dress up". But maybe that's why it bugs so bad.  Why aren't they referring to their shoes as 'shoesies'? It's sort of the design blogger equivalent of 'Chandie'.  I do like this girl's pantsies though. And she looks like she'd be fun to hang out with. 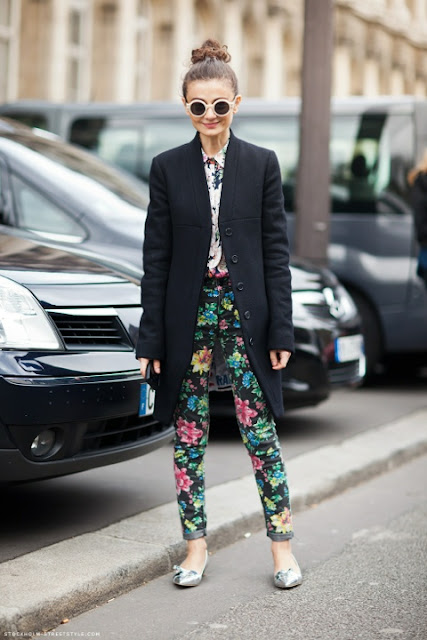 This person is very, very famous among this set because, "she is just so so cool" according to one blogger.  I know that I'm totally out of the fashion loop because I've never even heard of, Christine Centenera. But she's on every last blog I sifted through. They love her.
(update: I just googled her, she's the fashion editor at Harper's Australia. So she's not only just so cool, she has a cool job. ) 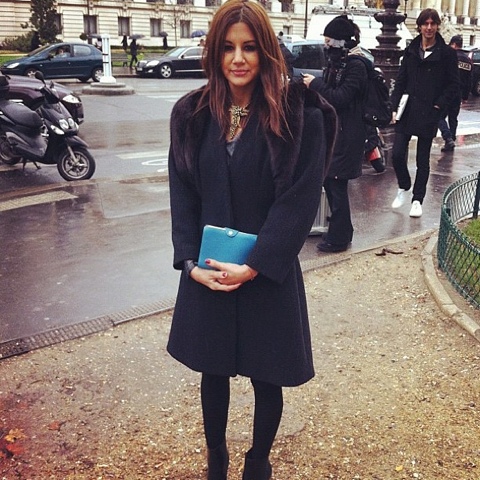 What else...oh, I'm still not feeling the whole...Navajo thing- or what's the p.c. thing to call it ? Anyway, I hear that a bunch of the fashion bloggers have boycotted UO for 'exploiting' the Navajo Nation and appropriating a culturally offensive and racist, line of fashion. Which sort of sucks for them, because where will they go for their Kimchi and Blue, summery dresses? 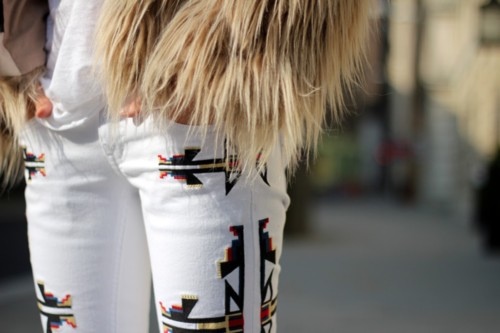 I like this whole pointy stud thing on accessories. It's sort of interesting. It helps when you go for the Hermes version and then mix it with a little Cartier.  I may try to work a version of this look in. 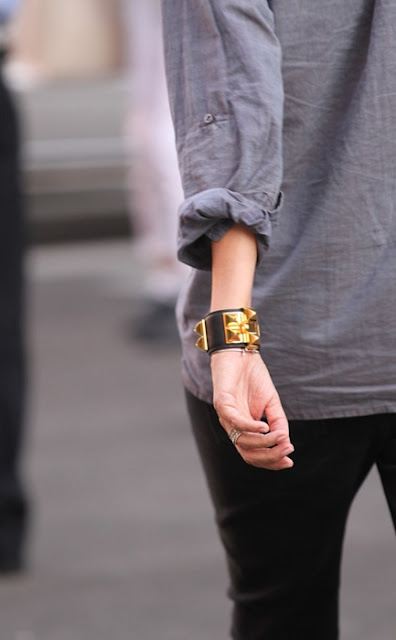 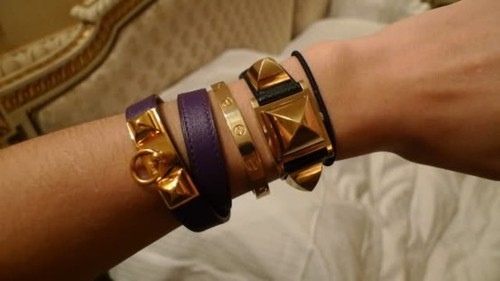 I'm liking this Leather Sleeve, mixed materials look. But being that we're all supposed to be looking at mint green pants (and anything else in that 'colour way') I may have missed the boat. 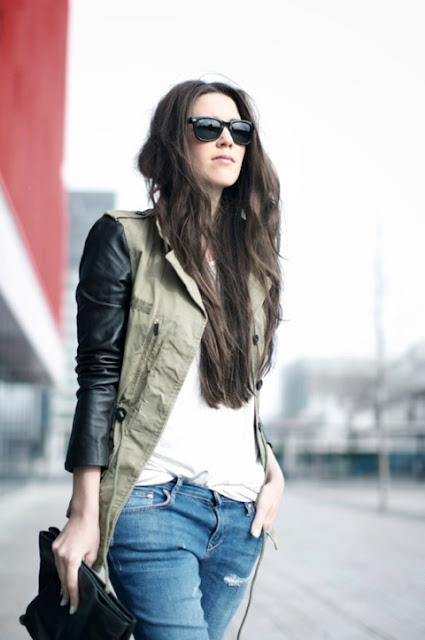 In other news, Kate Moss is 38 - as of January. Which to me is the same as, "she's almost 40".  This makes me happy in a way that only an over 40 year old woman can understand. And , it should be a reminder to all of us, that no beauty product is going to make you look young. It's all about the genetics. This girl is living proof that you can wreck yourself nightly, smoke packs of Parliments all day long .......and with good genes,  look just as good at 38 as you did at 28. (almost. The eyes don't lie.) 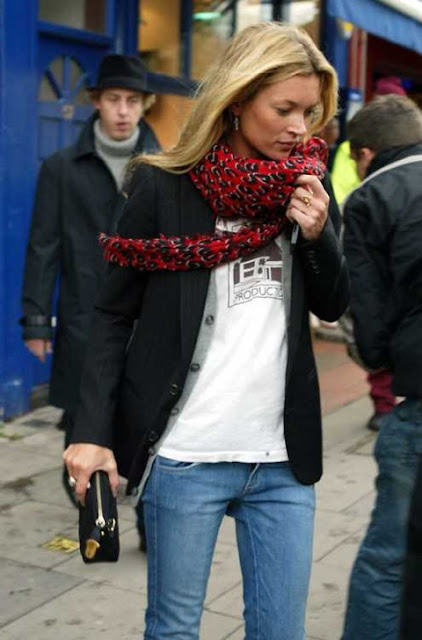 I love Jenna Lyons. I love these, color-blocked Celine pants with all my heart. I love her key fob hanging off her belt look.  I love her top buttoned jean jacket with the layered wool coat worn cape-style. I love that she kind of looks like a man in some shots and yet manages to look incredibly chic all the while. 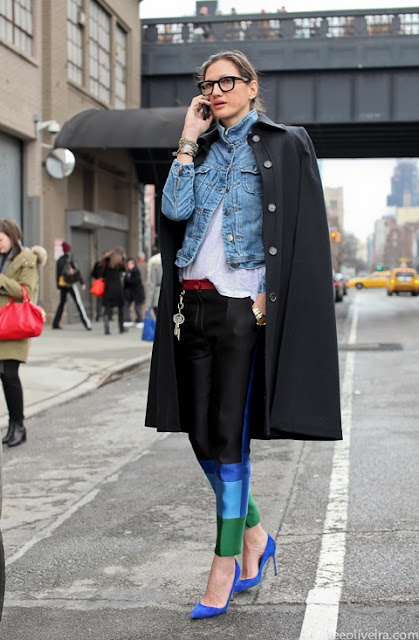 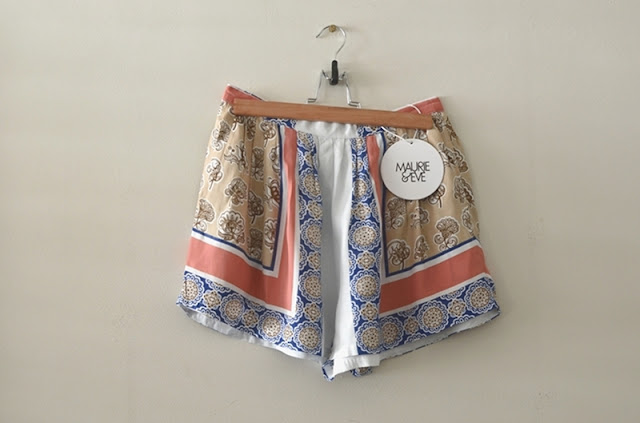 In case you were in the dark, as was I, They are highly sought after and even 'coveted' by many a blogger and, alas, completely sold out.

I think that's it for me and my fashion observations. I feel a nap coming on.

Thanks to the following fashion blogs for schooling my sweat pant wearing ways.

twinfashion
they all hate us
columbine smille
stylecaster
Email Post

Anonymous said…
So now I'm dying to know which blogs (other than the ones you took photos from) you looked at. And, will you go back? Your point of view is so funny and fun to read. Sunnies doesn't bother me as much as "lusting after" and "covet" does.
Thanks for a refreshing look at the world of fashion. I think you have a new blog in the making! Teri
Wednesday, March 21, 2012 at 4:53:00 PM PDT

Sara L said…
You kill me! Thanks for schooling me on the fashion updates...the blogs require their own special learning curve.
I love the bracelets, purses, love Jenna L...but wow, that's a lotta crap she's wearing all at once. I would double take if I that same outfit on the real streets, she can pull it off because, of course, she's Jenna Lyons.
I also love seeing the actresses/models who seemed so much younger than me 10 or 15 years ago...AGING! Some do it very well. But still, when you're 28 and someone is 18, or you're 35 and someone is 24..the gap seems larger. But when you're in your forties and they are approaching the late part of the 30's...they don't seem so far behind!
Does this mean the old ladies are smirking at me, thinking the same thing? Ugh, that thought is depressing ;)
Thursday, March 22, 2012 at 5:04:00 AM PDT

Teresa said…
that was a fun post, but those sneakers are killin me. both of those outfits were cute until i scrolled down and got a view of their feet. completely ruined it for me. just cause the rich and famous are doing it doesn't mean it's a good idea.
Friday, March 23, 2012 at 10:26:00 AM PDT

Lori said…
Dude, you should be moonlighting in this genre. Informative and interesting yet not so freaking self important. Nice combo :)
Friday, March 23, 2012 at 3:26:00 PM PDT

Render Sublime said…
I found this post really interesting! I came across your blog because I am researching interior design ideas for my own home, but I am actually a fashion blogger. As I am always reading other fashion blogs, I thought that your perspective was quite eye opening! Im Australian and I've actually used the term "sunnies" all my life and I definitely did not think of it as being unusual. Or that it may be interpreted as "a little girl playing dress up" kind of term. I understood it as a globally used colloquialism but I guess I was wrong. Some of the pieces that you have featured as unusual (such as the Isabel Marant sneakers) I hadn't thought anything of! I guess this is because I'm so involved with it all on a daily basis. Anyway I thought your perspective was really interesting and I found it an enjoyable read :)
Friday, March 30, 2012 at 9:37:00 AM PDT

beachbungalow8 said…
Fickle Sense, I just have never heard 'sunnies' used except for the fashion crowd, who presumably picked it up from Rachel Zoe. I'm sure it sounds better with an Australian accent. Doesn't every thing?

also, remember, I'm a 40+, mom of two...a regular person, and not in the industry. So my perspective is a product of that demographic.