well sort of. remember this shot from my weekend jaunt to cabo san lucas? this fabulous padded head board at the one and only palmilla? after posting this i received many emails and even phone calls, inquiring about the source of this beautiful textile. i thought for SURE it was a designer fabric. something i could locate at the pdc. 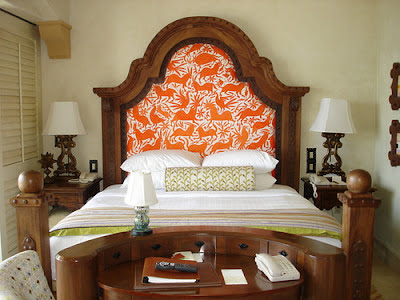 i of course went to my blog friend, stylecourt first (the walking power house of knowledge). in return, she did a little sleuthing and found the backstory on "colcha" fabrics. 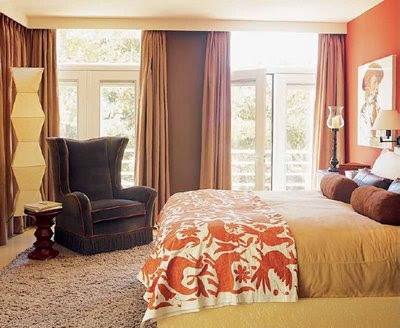 the term is now widely used to describe, wall hangings and bed coverletts of this vein. but the original, spanish, term was used to describe the needle work and the fabric on which the work was done. here's an 18th century example, from the met: 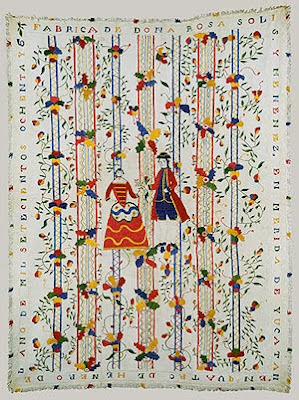 it's thought that the spaniards were influenced by the flora and fauna seen in eastern indian chintz (again, i would not have known this except that i totally looked over at stylecourts paper during the test. and you know what? she's so cool, she didn't even do the arm hook and tell on me) coincidentally, one of my dear friends the other day, told me that she knew the architect of the redo at las palmilla -from there i contacted the interior designer he used. i'm not sure if i got the right interior design group, so i won't mention their name (also they never got back to me-snooze/lose)

here's a nice example of my scanning skills, showing the fabric in blue. (domino june '06) 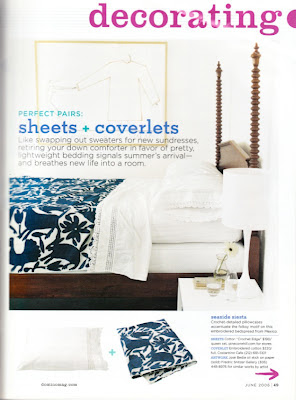 my next stop was market editor, monika biegler over at 'domino'. monika immediately got back to me and reminded me that they had featured the fabric in a spread featuring nate turner (l.a. designer and antiques dealer). 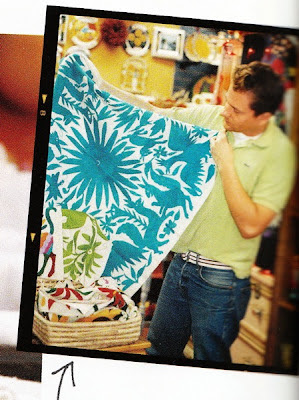 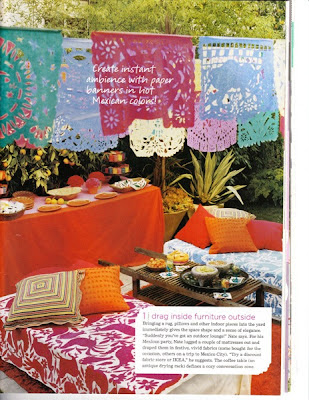 FINALLY. we've found it! (on knees, bent arms, fisted hands, squinched face) and guess what. from what i can tell....you have to buy them in mexico city. or in mexico, in general. nice. the fore mentioned architect's wife was able to buy the fabric from the hotel directly but i'm not sure if that wasn't a sort of , insider bro-deal.

i feel safe to say that someone will be emailing me letting me know that they sell these imports. so stay tuned. and if i see any while i'm down there next month...i'll grab a few for us. **update** thank you leah hennen (more ways to waste time blogger) for a much more comprehensive post on this fabric and where you can find it. jacaranda home.

Monica said…
I am very interested in these fabrics. Could you let me know if they become available in the US?
Tuesday, February 5, 2008 at 12:00:00 PM PST

beachbungalow8 said…
you betcha. i can't imagine that SOMEbody here in the states hasnt' scooped up a truck full of these. they're the new suzani after all!
Tuesday, February 5, 2008 at 12:03:00 PM PST

Leah said…
I just did a post last week on a company that imports these fabrics:

You can also get them from this eBay seller:

i knew it wasn't only available in mexico.

Mrs. Blandings said…
BUT, you did an excellent job with your new scanner. Now the print world is your oyster,too.
Tuesday, February 5, 2008 at 8:05:00 PM PST

beachbungalow8 said…
thanks in(side) the loop! funny, i also emailed grace at designsponge, a few weeks before she posted this.

i think she forgot to respond once she found it.