"please do not open until christmas, love aunt karma" 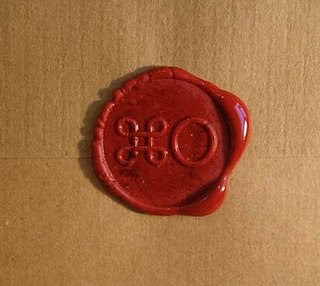 photo found on altruism in the morning
When I was in high school, a few days before Christmas, I secretly unwrapped a gift~navy blue, brooks brothers blazer....wore it out to a party, came home and re-wrapped it {my brother's idea} To know what was in the box, tells the obvious. I was a peeker. I've been a peeker from way back. I can still tell you where some of my friends' parents hid the Christmas gifts:
The Flatleys: the old root cellar in the basement The Meyers: back of their mother's closet The Bayers: the sewing room

Because not only was I a peeker, but I encouraged others to do the same. Even when it was met with trepidation from my friends~ I pushed and cajoled. It's a wonder that I never stumbled across a lump of coal with my name on it. 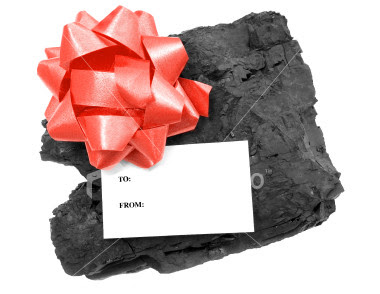 With the notion that peekers beget little peekers, I've spent the last month, stashing gifts in the most obscure places. Now, a few days before Christmas, like a squirrel trying to remember where she's hid her nut, I'm digging frantically...trying to remember and having little luck.
Merry Christmas to you too, Aunt Karma.
Email Post

beachbungalow8 said…
thanks courtney! god, i'm in so much trouble. I can't find half the things I've bought!

I have a feeling as with every year, gifts will come tumbling from the rafters as we pull out beach stuff, come spring
Tuesday, December 23, 2008 at 11:20:00 AM PST

Mrs. Blandings said…
Megan - I was a peeker, too. My friends were all, "Oh, you're going to ruin the surprise!" No. I had the surprise and I still have to wait. I never opened anything, used it and then put it back. Then again, I didn't have your brother. I put my gifts in the scary basement - no one in my house is brave enough. Yet. Good luck!
Tuesday, December 23, 2008 at 11:32:00 AM PST

beachbungalow8 said…
damn I wish there were basements in california! scary dirt floored basements. Although that never hindered my search.

The night I wore my blue blazer, as an act of solidarity my brother wore a gift too. His was one of those brooks brothers, mismatched, remnant shirts.

Karena said…
Very funny! I do remember how much us older kids had to keep the secret of Santa Claus alive so that the little ones wouldn't lose the magic and faith of Christmas
Tuesday, December 23, 2008 at 11:49:00 AM PST

Liz said…
It makes me feel better to know I was not the only one that opened and re-wrapped. I think it may have been an early manifestation of control freak tendencies, I had to make sure Mom and Dad got my Christmas requests right! I am in trouble if this karma business is true. I don't have enough room to put the everyday things away, let alone hide things!
Tuesday, December 23, 2008 at 11:56:00 AM PST

Unknown said…
lolLOL! I love that you WORE IT!!!

I peaked one year when I was a kid and found a Cabbage Patch Kid pet {I can't remember the name now} and when I opened it on x-mas, I wasn't excited because I already knew what it was. It ruined it for me so I never peaked again.
Tuesday, December 23, 2008 at 12:03:00 PM PST

SGM said…
MEGAN! I can't believe you wore the blazer out and then wrapped it back up! My sister did that with a neon tie I bought her (in urban Wichita) back in the 80s. I am still totally pissed. :)

Anonymous said…
what a great post! Thanks for the laugh. I have a couple peekers myself so I totally have been in the squirrel mode.
Tuesday, December 23, 2008 at 12:17:00 PM PST

High-Heeled Foot in the door said…
You are too funny. I just a vision of National Lampoon Christmas Vacation with Clark in the attic finding old gifts that were hidden years ago.

I can't believe you wore the jacket and mom and dad were none the wiser.

beachbungalow8 said…
you guys, I know. I sort of can't believe I was such a little snot back then.

On Christmas morning, my mother, took a few sniffs to the air as I unwrapped my blazer and said,'I smell cigarette smoke'

soodie :: said…
Hi Megan! I peeked too. Except I peeked in my younger brother's presents. He hated surprises to be ruined. I would peek and threaten to tell him what was inside if he didn't clean up my room or make my bed or fetch me a bowl of cereal or something. It worked out quite well for a while until he got bigger than me and joined the wrestling team.
Tuesday, December 23, 2008 at 12:50:00 PM PST

~ Lisa @ AbidingThere~ said…
I remember vividly the one year I peeked and saw that white fluffy teddy bear in the pink bonnet. It really did ruin the magic of Christmas morning, and I learned my lesson - never peeked again. Now as I hide all the gifts for my four kiddos, I keep a list of what I have and where it's hiding - then I have to hide the list! Merry Christmas to you!
Tuesday, December 23, 2008 at 1:21:00 PM PST

Kelly Anne said…
My mother does the whole squirreling things away all over the house. As a result, things would show up in our stocking or Easter basket years and years after she'd bought them. It was actually quite hilarious.
Tuesday, December 23, 2008 at 3:52:00 PM PST

MaryBeth said…
Yes, I was a re-wrapper. Now I am a stasher and can't find things until March.
My mom could never remember where she hid the all the Easter eggs, the count always came up short. That was the great surprise in our house finding them a few rotten months later. xo, MB
Tuesday, December 23, 2008 at 8:11:00 PM PST

Sarah's Fab Day said…
I always peeked, would unwrap then rewrap. So bad. My girlfriend did it too and she wore out a pair of red boots when we were in highschool, I still laugh about that. Finally when I was a senior in high school I actually got a surprise and it was really nice. So I didn't peek (too often) anymore. hee hee.
Tuesday, December 23, 2008 at 8:19:00 PM PST

benson said…
totally can relate. To this day my husband knows he has to padlock any presents for me and NEVER tell anyone I know (found out I was going to Paris from my hairdresser before husband shared the gift...won the Oscar when that was unwrapped) He, on the other hand, can have an open bag on the bed with his gifts...and never look at all. How does he do that?
Tuesday, December 23, 2008 at 9:54:00 PM PST

Anonymous said…
Thanks for sharing.Wish you all Merry Christmas n New Year.May this forth coming year bring joy n peace all around the world.

Anonymous said…
That is awesome. Have you checked the garage and under the bed?

Abigail Leigh said…
My sister and I were sooo peekers too.....and we even gave our parents lists of what we wanted, we just wanted to make sure we got it!!!!! I like that, wearing it out then wrapping it back up!!!!

Tracy Elaine said…
In my family, it's not Christmas if my parents are searching around on Christmas day trying to find that one (or more) last gift that they hid... somewhere. Sometimes it took them until New Year's to find a gift. Even now that we are adults, my parents are still hiding presents. It's become a family tradition, and I wouldn't give it up for the world.
Monday, December 29, 2008 at 4:58:00 PM PST